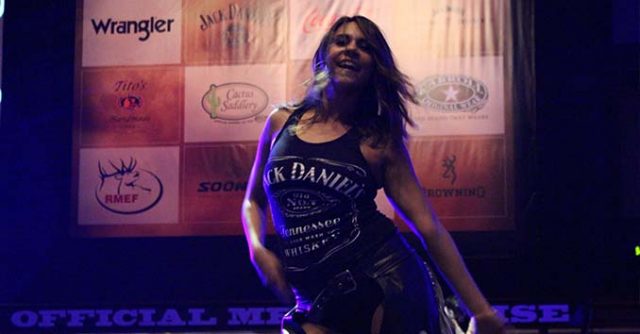 It’s about that time of year when the Las Vegas Strip turns into Rodeo central for the annual Wrangler National Finals Rodeo. We’re filling up our flasks and saddling up for another kick-ass ten days of NFR!

Here are some of our best tips for having a wild time in Las Vegas during the 2019 Wrangler National Finals Rodeo.

Where to watch the Wrangler National Finals Rodeo for Free

If you’re staying downtown, then one of the best spots to party and watch the Rodeo is at the Downtown Events Center. Mosey on down and check out the FREE live-action viewing parties every night from December 5–14. Don’t miss a single 8-second ride as you watch all of the NFR action on giant TV screens set up throughout the venue. Enjoy food & drink specials, nightly entertainment and more.

Starting at 6:45 PM nightly from December 5–14, you won’t miss a second of the NFR action at the Mirage Race and Sports Book, home to the largest HD Projection screens in Las Vegas! Enjoy free admission and exclusive giveaways during performances.

After the Viewing party, the Mirage Race and Sports Book transforms itself into the number one desert honky-tonk with nightly country music shows and country DJs.

Join the action at the Veil Pavilion at the Silverton Hotel and Casino, December 5 – 14, 2019 from 6:30 pm to midnight. After the viewing parties stay for nightly Cowboys & Indians Party and country concerts with some of the biggest names in country music.

TOBY KEITH’S I LOVE THIS BAR & GRILL Inside Harrah’s

Throughout the entire NFR week, there will be special events:

By far, one of the biggest parties on the Strip takes place nightly at the Mirage Race and Sports Book. Every night the Mirage transforms their sportsbook into a gigantic honky-tonk with some of the top names in country music.

We’ve watched a ton of different country performers in Las Vegas, but by far one of the best shows we’ve been to in this city was Dwight Yoakam at last year’s NFR.

Kicking off his Residency at Wynn Las Vegas during this year’s NFR, Yoakam will share the songs, sights, and stories of California country music’s dramatic arrival and lasting impact on American country music scene.

Beginning with the Dust Bowl era, Yoakam will take the audience on a musical excursion exploring the history of the sounds associated with Bakersfield, Calif. through songs and storytelling in this exclusive residency. Yoakam will perform music that influenced and created the “Bakersfield Sound” and “California Country-Rock” genres of country music from its early beginnings to its commercial zeniths, in addition to his own original music that was shaped and influenced by this legacy.

Tickets can be found here on Ticketmaster

The Charlie Daniels Band
Dec 08 at 10:00 PM
The Showroom at the Golden Nugget

If you’re looking for real country music during the NFR, then it doesn’t get much better than one of the original outlaws of country music, Charlie Daniels. Celebrating the 40th Anniversary of his signature song “The Devil Went Down To Georgia,” Daniels hits the stage on December 8th at the Golden Nugget.

You can find tickets here on TicketMaster

As country music icons Reba McEntire, Kix Brooks, and Ronnie Dunn prepare to kick off the fourth year of their hit residency “Together in Vegas” at The Colosseum at Caesars Palace, eight more show dates have been added during NFR to wrap up their 2019 residency.

Tickets can be found here on Ticketmaster

The California native released his first album, “Used Heart for Sale,” in 1996 and since then has released eight additional studio albums selling over eight million copies, has been certified platinum on three back-to-back albums, and has been certified gold five times. Allan has five No. 1 hits at country radio, fourteen Top 10 hits to his credit and has amassed over 2.1billion total streams.

Tickets for the shows cab be found here on Ticketmaster

If you miss the good ol’ days of rowdy ass country music shows, then Las Vegas locals, The Rhyolite Sound, has you covered. Fresh of the release of their latest album, Mojave Gold, this five-piece Desert Honky Tonk band will be kicking ass at at least 4 different shows throughout NFR.

This is one of our favorite events of the year. For those who want to see the Rodeo live, but either couldn’t get tickets or wanted to save a little money for the slots, you should check out the Junior NFR held in the Cowboy Christmas Wrangler Rodeo Arena at the Las Vegas Convention Center. These kids are awesome, and many of them will hit the NFR circuit within the next couple of years.