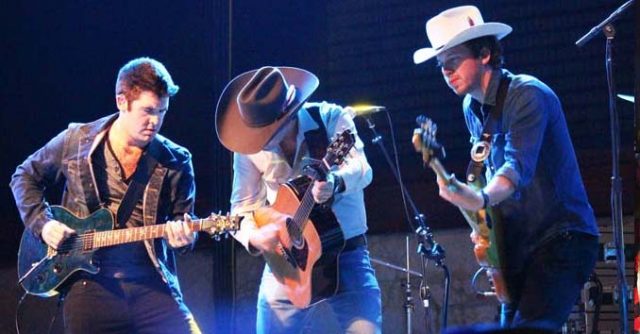 For Las Vegas Locals that love country music, we have a love-hate relationship with the city. On the one hand, we attract some of the top country music acts in the world, but if you’re looking for local country bands or a local country Honky Tonk bar, then that’s where the frustration comes in.

Depending on the night it’s really hit and miss; there are a few good bands and a few good places to hit, but you’re going to have to put in some work to find the right spot. Or, you could just grab a bottle of Jack, throw on some David Allan Coe, head Downtown, and hope for the best.

A warning for those who are new to Vegas: While some of these bars claim to be country, I’ve been to quite a few where I walked in and immediately walked out when I heard the rap crap playing; that being said, I’m sure it’s a problem throughout the country.

Saddle ‘N’ Spurs is a local Las Vegas bar that claims to be the “LAST Remaining REAL Honky Tonk Bar in Las Vegas.” Located at 2333 N Jones Blvd # 108, this is definitely not a tourist trap, as it’s far enough off strip where most visitors aren’t going to take the time to travel. They’ve got a dive bar feel, great happy hour specials, cheap drinks, no cover charge, and local live bands.

On most weekends you can Catch the Bobby Kingston Band playing the classics.

Located inside of TI, Gilley’s Saloon & Dance Hall features live country rock music every Friday & Saturday night starting at around 10 pm. They feature mostly regional acts who play everything from the greats like Waylon, Willie, and Merle to the Pop Country crap that makes me wish we had a real Honky Tonk in Vegas!

If you can make it through the Pop Crap, you will see some two-steppin’, line dancing, Bikini Bull Riding, and of course the Gilley’s Girls.

To be honest, I’m not a fan of POP country music, but I am a fan of Freedom and throughout the unconstitutional lockdowns this bar treated us like humans and didn’t harass us for trying to live a mask-free life and have fun! While you are likely to hear more pop country than outlaw country, every once in awhile they will surprise you — we did see Whitey Morgan there once so it looks like they occasionally attract some real country acts.

If you find yourself in Vegas, they do claim to be a rockin’ country bar, just be aware it’s probably “modern” country with a classic or two thrown in throughout the night. At the very least, you’ll be able to dance and get some decently priced drinks while meeting some pretty good people! They are located in Town Square just off the strip at 6611 S Las Vegas Blvd #160.

The GravyTrain Saloon is a country bar and live music venue on the East side of the Las Vegas Valley. From live bands to open jams it’s the place to be to listen to good country and rockabilly music! The GravyTrain is located at 3246 E Desert Inn Rd. in Las Vegas.

Since 1962 The Hideaway Bar and Grill has been a favorite around town. Located at 3369 Thom Blvd in Las Vegas, the bard features live country bands, line dancing and open jams.

From country greats like Hank 3, David Allan Coe, Whiskey Dick, and Scott Biram to local acts like The Rhyolite Sound and the Reeves Brothers you never know who you’re going to see at the following bars. They certainly aren’t traditional country bars, but when they do bring in country acts they are usually the kind of country no other bar will dare touch — the good shit!

Every 1st and 3rd Friday, Downtown Container Park hosts a night of country music, with a live band and free line dancing lessons before the show starts.

If you’re looking for some Classic Outlaw Country, Western Swing, Whiskey, and the Classics, then The Reeves Brothers are always a good bet.

Formed in Las Vegas, NV in 2013, The Rhyolite Sound is one of Las Vegas’ only true Honky Tonk Bands. They can usually be found at Dive Bars throughout Las Vegas playing the greats as well as their own unique desert style country.

I think these guys play more show then any band I’ve ever seen. On any given night you can see them playing on the Fremont Street Experience followed by a gig where they play at the Park.

The Highlight of the Year: NFR Finals Week

Every December in Las Vegas, the Strip turns into a sea of cowboy hats, Wrangler Jeans, and belt buckles as the Wrangler National Finals Rodeo takes over the town. It’s Ten days of Rodeo, Country Music, and about the only time where you can actually get a Jack and Coke for $5 in Las Vegas! Places like the Sportsbook inside the Mirage transform into a 10-day, Vegas-style Honky Tonk with plenty of Jack and lots of country music acts.

As we get closer to December, check out our calendar for a full list of NFR events and Country Music Concerts.