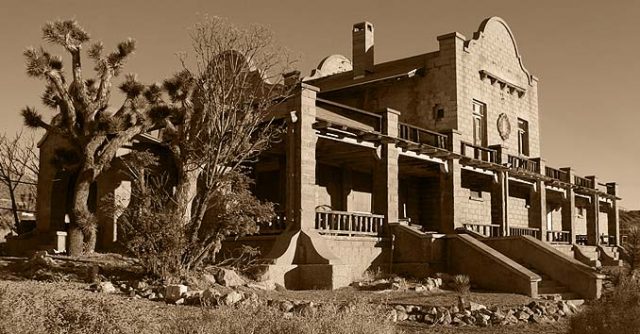 Are you looking for Ghost Towns near Las Vegas? Nevada is filled with historic sites and relics of the Old West, and many of the old ghost towns and mining camps that helped build this country can be found within a couple of hours or so of Las Vegas.

Here is a list of the Nevada ghost towns that are within a couple of hours driving distance from Las Vegas.

Around 25 miles south of the infamous Outlaw town of Pioche, is the city of Caliente, Nevada. About 1,000 people still live in the city, but to this day many of the original buildings still stand. Caliente was primarily a ranching town, but many of the local families worked in the nearby mines in Pioche and Delamar.

In 1923, the Caliente Train Depot was built. Within a couple of years, the town was booming and grew to around 5,000 residents. For more than four decades, Caliente was one of the major division points on the railroad line. But that all ended when Las Vegas became the main branch point when steam engines were replaced by diesel locomotives. After the train depot closed, most of the people moved away from the town.

Caliente is about 2 ½ hours from Vegas. Take the I-15 N to US-93 N/Great Basin Hwy to Market St in Caliente. If you make the drive out, make sure to check out the nearby ghost towns of Pioche and Delamar.

About 16 miles west of Caliente is the ghost town site of Delamar. Today the town is largely made up of ruins; more wild horses are roaming the area than people. But for those who love the Wild West, this is a blast from the past that you shouldn’t miss.

Some of the ruins are on private mining land, so you need to be careful about where you go. From Caliente, NV Head southeast on Market St toward Front St. Turn right onto US-93 S/Front St and then turn left onto S Poleline Rd. Keep left and head about 5.8 miles to Delmar.

Founded in 1902, Goldfield’s real claim to fame comes from the Earp brothers. Shortly after the famous gunfight at the OK Corral in Tombstone, Arizona both Wyatt Earp and Virgil Earp called Goldfield home. Nevada legend says that Virgil actually served as the town’s deputy sheriff, and Wyatt was a pit boss in Tex Rickard’s gambling casino.

Goldfield is also home to an infamously haunted hotel called the Goldfield Hotel. Ghosts of children playing in the lobby have been reported, in addition to a ghost that people claim randomly stabs hotel guests.

From Vegas take US-95 N for about three hours.

The Goodsprings Mining and ranching community was first mined back in 1856. The town is still home to a couple of hundred people and features some old miners cabins and relics from the past. The town is also home to the famous Pioneer Saloon, which has been featured in numerous Hollywood movies and T.V. Shows.

Most people have heard of Wild West towns like Tombstone and Dodge City, but one long forgotten ghost town makes both of those cities look a walk through Disneyland. Pioche, Nevada was an outlaws den of thieves, scoundrels, degenerates, and murderers. The town was so bad that 72 people were killed in gunfights before the town experienced a single natural death.

Today the town is home to about one-thousand people, but many of the early relics still exist. In fact, one of these early spots shows you just how bad this town was.

The town’s cemetery houses “Murderer’s Row,” a section set apart from the other graves, containing the graves of over 100 murderers. Some people refer to Old West cemeteries as Boot Hill, a common name for the burial grounds of Western gunfighters, or those who “died with their boots on.”

Pioneer, Nevada is a Ghost Town that began as a mining camp in 1908. While there isn’t a whole lot left, it is situated in between the ghost towns of Rhyolite and Bullfrog, making it worth a stop if you’re in the area exploring other long-forgotten towns.

The old town is around 7 miles north of Beatty, Nevada, and 8 miles northeast of the ghost towns of Rhyolite and Bullfrog. Pioneer is 130 northwest of Las Vegas, along Pioneer Road, a gravel road off U.S. Route 95.

Just outside of Las Vegas is the historic mining ghost town in Potosi, Nevada.

About 120 miles North of Las Vegas is the ghost town of Rhyolite, a town that sprung up in 1904 as a result of the Gold Rush. Rhyolite is one of the larger Ghost Towns, which at one time had over 10,000 people living in the city.

By 1907, the town was one of the few mining towns that had electricity.  There were hotels, stores, a school, an ice plant, two electric plants, foundries, a hospital, and machine shops. Unfortunately for the town, the 1907 financial crisis was the beginning of the end for the city. In 1916 the town’s power was cut, and it’s now one of the many lost towns of the Old West.

To get to Rhyolite and the Bullfrog District from Las Vegas take the US-95 N for about 120 miles to Airport Rd in Beatty.

One mile South of Rhyolite is the old town of Bullfrog. Gold was first discovered in the Bullfrog District by Frank “Shorty” Harris and Eddie Cross in August 1904. Shortly after, towns sprang up throughout the area including Beatty, Pioneer, Gold Center, and Rhyolite which all became known together as the Bullfrog District.

The Bullfrog Mining District includes the area of Beatty west of US Highway 95 and the areas near the old towns of Rhyolite and Pioneer. It covers all of the Bullfrog Hills and properties in the adjoining part of the Grapevine Mountains.

Royal City: The Jack Rabbit Mine

This is another one of those Old Western towns where you don’t know where the legend begins or where the truth even starts. According to Nevada lore, the mine got its name when an old prospector threw a rock at a jackrabbit, missed, and instead found himself with a fist full of silver.

Within a couple of months, the town of Royal City was born. $6,000,000 in silver later, mining production fell off, and today we are left with nothing but ruins and a hint that there was once a railroad. The town is about 20 minutes North of Pioche

From Las Vegas take US-93 N/Great Basin Hwy to Lincoln County. It’s about a three hours’ drive from Vegas. If you are coming from the Ghost Town of Pioche, Travel North U.S. Highway 93, and turn west on a graded road about 14 miles from town. Continue for about a mile to Jackrabbit.

About 45 minutes from Las Vegas, just South of Boulder city lies the rugged former mine town of Eldorado. The ghost town has a checkered past, with a long history of violence, killings, and disputes over the land and the mines. It’s one of the oldest mines in Nevada and is extremely popular with photographers and outdoorsmen.

You can visit the ghost town, check out the old country store, explore the Techatticup Mines or go just down the road where you will find kayaking, hiking, and horseback riding along the Colorado River at Nelson’s Landing.

A word of warning for anyone who is heading out to explore these ancient relics of the past: Some of these areas can be very dangerous. Bring plenty of water, watch out for rattlesnakes, and stay away from any old mine shafts or building that look like they could collapse.

If you’re really into exploring these old Nevada Ghost Towns, I suggest the following books which detail historical towns and mining camps throughout the state of Nevada.

Las Vegas Spring Break 2022 Guide: Where to Go & Where to Party