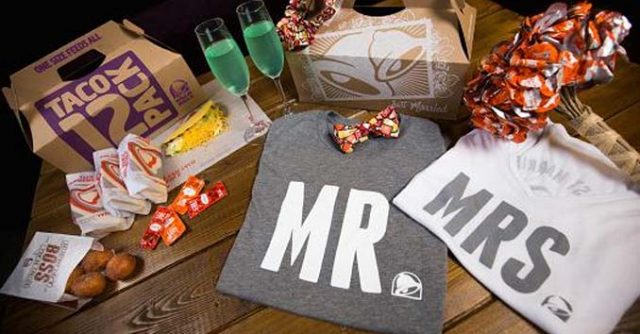 Maybe it’s the new Marijuana legalization that just went through that’s causing a case of late-night munchie madness for couples; apparently, there is a new wedding craze about to hit Las Vegas – getting married at Taco Bell.

The wedding packages are $600 and according to Taco Bell “Couples can come right in and order a wedding off of our menu,” Chief Marketing Officer Marisa Thalberg said in a statement.

But what about the after-wedding reception, you ask? Don’t worry; they have you covered. Included in the Taco Bell Wedding Package is the newlywed’s first meal — a 12-pack of tacos and a Cinnabon Delights cake.

Thalberg said, “In a town known for pulling out all of the stops, we think this will be the most craveable matrimonial experience to ever hit Vegas.”

Once a wedding package is purchased at the counter, Taco Bell said couples can expect the ceremony to take place in the upstairs wedding chapel within four to six hours.

Taco Bell is partnering with Las Vegas-based Flora Pop, a traveling pop-up wedding company and has launched a contest for couples who want to be the first Taco Bell Marriage.

Taco Bell has also launched the Love and Tacos Contest and Happily Ever Crashers Sweepstakes, which will give a couple an all-expense paid trip to Las Vegas to become the first to be married at the Taco Bell Cantina restaurant. This unique Taco Bell is located on Harmon Corner, in the heart of the famous Las Vegas Strip right next to the Planet Hollywood Hotel and Casino. In true Las Vegas fashion, the restaurant will also include a VIP lounge and DJ booth.