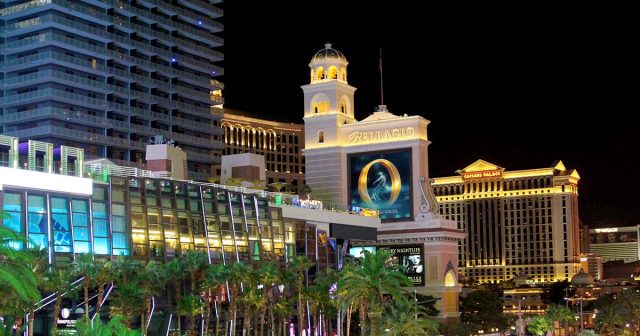 Las Vegas is one of the most well-known cities in the world. The Las Vegas Strip attracts thousands of visitors every day who flock to the city looking to strike it rich in the casinos, dine on fine cuisine and enjoy the Vegas nightlife.

Sin City still has a few secrets up its sleeve, though. From bars that require passwords to attractions that only locals know about, Las Vegas still manages to thrill guests looking for something different with unique, exciting and exclusive opportunities – if you know how to find them.

Below you’ll find eight unique Las Vegas experiences that are hiding in plain sight. They’re all worth a visit if you’re looking to wander off the beaten path and do something different.

Of all the hidden gems you’d expect to find in Las Vegas, you wouldn’t expect bathrooms to be on that list but Sin City has some very unique bathrooms scattered about.

For the high-roller in you, one of the most glamorous bathrooms you will find on the Strip is inside Aria’s luxurious Sky Suites. The spa-style bathroom has floor to ceiling windows, giving you incredible views of the Las Vegas valley as you soak in your own private oversize hot tub.

The next time you find yourself Downtown at the Main Street Station Casino, which is located at the top of the Fremont Street Experience next to the Plaza, you’ll find one of the most unique bathrooms of all. Here you’ll have a chance to pee on the Berlin Wall.

The good folks at Main Street Station have one heck of a sense of humor, and with the perfect balance of humor and historical irony they mounted urinals on a chunk of the actual Berlin Wall. You’ll find this oddity in the men’s room on the main casino floor, and don’t worry ladies – there is an attendant nearby to signal when the coast is clear so everyone has a chance to go inside and take a look.

While you’re Downtown, be sure to check out the Container Park. You can’t miss this urban marvel because there’s a gigantic metal praying mantis in front. If that wasn’t enough, it shoots flames out of its antennae every so often because it was originally constructed as part of the iconic Burning Man festival. After the desert festival came to an end the massive insect was brought to Vegas where it delights guests nightly with its pyrotechnic displays.

The Container Park is nestled at the foot of Fremont Street. This shopping experience features stores built inside shipping containers that have been stacked and arranged to create a unique layout that has transformed the area and made it into a must-see but off the beaten track destination.

Once upon a time it was fairly commonplace for casino cafes to offer late-night dining specials for its guests. After all, the end goal is for visitors to eat and get back out to the casino floor.

Over the years the traditional after-midnight deals started to dry up in favor of high end dining experiences.

If you still want a taste of the good old days, and if your version of the good old days include a killer deal for steak and eggs, head to the South Point Hotel and Casino, where the Coronado Cafe serves up six unbelievable dining deals for night owls.

Served from midnight to 6am, deals range from biscuits and gravy for $2.95 to a hefty 7-ounce New York steak, two eggs, hash browns and toast for only $4.95. You really can’t find better deals on the Strip these days, and everyone knows that there’s nothing more satisfying than a $4.95 steak at 3am.

Looking for more late-night deals? Check out our list of the top late-night happy hour spots.

Las Vegas is constantly changing. It’s a divisive issue with passionate opinions on both sides about keeping the city the way it was or making it as modern and luxe as possible. It’s interesting that one of the newest trends involves a return to classic speakeasies, which are popping up all over the place. Many new hotels have secret bars that require insider knowledge to get inside. Some even require a text ahead of time to get directions to find the bar in the first place.

One such hidden bar is the Commonwealth, a very modern bar located in Downtown Las Vegas. At first glance it’s a bar with lots of throwbacks to the Prohibition days, including themed cocktails. However, guests in the know can gain access to the Laundry Room, a secret speakeasy inside the bar that’s only accessible via text message. The instructions on the website request that a text message is sent in advance for reservations, but there’s no guarantee you’ll gain entry and that makes it all the more exclusive.

And while Las Vegas is experiencing a trend toward modern takes on timeless classics, some of those classics have never left. Though almost every hotel on the Strip has been updated, remodeled or refreshed over the years, take a step back from Las Vegas Boulevard and you’ll find a prime example of a timeless Vegas era.

One such example of an authentic classic Vegas experience is the Peppermill. You’ve probably passed it on the way to the airport. The Peppermill has been in Las Vegas for 40 years and it has served as the backdrop for numerous Vegas-themed movies and television shows. Time has been standing still for four decades in this restaurant and bar, which is open 24-hours and offers an extensive cocktail menu. Visitors can choose from breakfast, lunch and dinner menus depending on the time of day. It’s one of the few places in the city that remains rooted in an era gone by.

Fans of the MGM Grand Las Vegas know that lions are part of the MGM’s storied history. From the MGM lions that have graced movie screens for almost a century to the majestic gold lion staring down guests on Las Vegas Boulevard, lions and the MGM brand have always gone hand in hand. The hotel used to feature a lion exhibit where a pride of lions greeted guests daily. The lions were brought to the hotel every day from their home just off the Strip, and when MGM decided to retire the lions the off-Strip property became their permanent home.

Enter the Lion Habitat, home to the MGM lions and other rescued big cats and creatures. The Lion Habitat is also home to Ozzie the Giraffe. Not only is Ozzie the only giraffe in the state of Nevada, but he’s well known for his painting techniques and guests can interact with him and watch him create his masterpieces.

The Lion Habitat is the perfect destination if you’re a big cat fan and want to see a key piece of Las Vegas history.

Las Vegas was once known for its neon lights up and down the Strip. The casinos still utilize lighting design in their architecture, but neon is fast giving way to energy efficient LED and other technology. As Old Las Vegas is razed to make room for new wonders, a group of neon enthusiasts has come together to salvage this important aspect of Vegas history.

The Neon Museum was founded in 1996 to help preserve as many neon signs as possible. The museum houses the famed Neon Boneyard, which is a massive outdoor site where the old signage is retired. Most recently the giant guitar from the Hard Rock Cafe became part of the museum’s permanent collection.

The Neon Museum is open for daytime and nighttime tours, but if you have to choose one over the other then definitely consider that the signs come to life at night under the desert sky. That’s one heck of a memorable experience!

Las Vegas visitors looking for a unique gambling experience need to head to the second floor of the D Las Vegas on Fremont Street. When Derek Stevens bought the Downtown hotel, which was formerly known as Fitzgerald’s, he put it through an extensive remodel but he wanted to give his hotel a taste of the old days with a classic game of chance that used to be a staple in Vegas casinos in the 1980s and 1990s. After an extensive search, Stevens and his crew were able to locate a Sigma Derby machine and the old-fashioned machine has been delighting guests ever since.

The Sigma Derby machine is a horse racing machine where people gather around and place bets on the little mechanical horses that race around the track every two minutes. The machine runs on quarters, not the paper vouchers you see on almost every other slot machine these days, and when you win there’s the satisfying plink plink plink sound as your winnings hit the metal tray below.

It’s hard to understand the allure until you experience it for yourself, but between the thrill of the bet and the camaraderie of the people who come to watch the action, there’s no question that Sigma Derby is a popular place to hang out and (hopefully) make a few coins.

What makes this experience so unique is that the D’s Sigma Derby machine is quite possibly the last functional machine in the world. Stevens has been buying up parts whenever he finds them, but there will come a point when the horses have to go to pasture in favor of the newer models that have been popping up, so make sure you check out Sigma Derby while it’s up and running.

There are countless hidden gems in Las Vegas if you’re willing to seek them out. This list barely scratches the surface of what’s out there, but hopefully it will inspire guests to continue the quest to find unique things to do in Sin City.