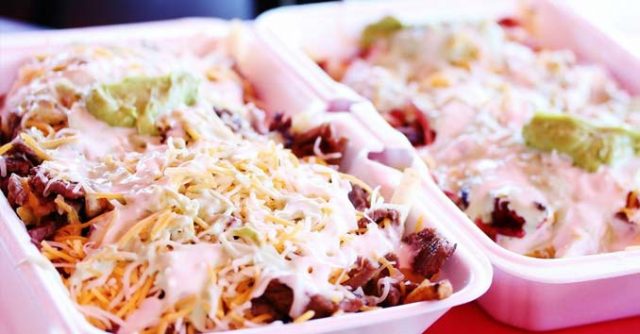 Las Vegas is a food lover’s paradise. There are thousands of restaurants to choose from; everything from five-star celebrity chef-run joints to dive bars and hole in the wall restaurants that serve some of the most off the wall creations you can think of. But what do you do when it’s late, you’ve had a few too many, and you’re just looking for a cheap snack to hold you over on your way to find your next drink?

But what do you do when it’s late, you’ve had a few too many, and you’re just looking for a cheap snack to hold you over until you find your next drink?

So you’re looking for a cheap place to eat, huh? Don’t worry; we have you covered. Here are some of our favorite late night, budget-friendly places to eat on the Strip! This is one of my favorite places to eat on the Strip. Located right next door to the Wynn and the Encore Hotel & Casino, Tacos El Gordo is my pick for not only one of the best places for a late night snack but also the best place for authentic street tacos in Las Vegas. Their El Pastor Tacos cannot be beaten; and for the more adventurous eaters, their organ meats are also a big hit.

This place is very popular; even at 2 in the morning, there is often a pretty good line of people waiting to snag some of these awesome tacos.

So where is Tacos El Gordo located?

Tacos El Gordo is located in the Gold Key Shops at 3049 S Las Vegas Blvd, Las Vegas, NV 89109. They are open until 2 a.m. throughout the week and on the weekends they stay open until 4 a.m. You can’t go wrong with Pin-up Pizza. A huge slice of New York style pizza, a knot of garlic bread, and a beer for $10.99. Hell, most Casino bars charge that much for a single drink! Oh yeah, did I mention the pizza is served by girls who look like 1950’s style pinup girls? Come on, what’s not to like?

So where is Pin-up Pizza located?

Pin-up Pizza is located right in front of the Planet Hollywood Resort & Casino at 3667 S Las Vegas Blvd, Las Vegas, NV 89109. You can also enter from inside the Casino, right through the Sports Book. They are open every day until 4 a.m. For right around $10 you can score a beer and one of the best late night sandwiches in Las Vegas. My favorite is the Full Montagu with a side of their Horseradish Sauce.

So where are they located?

Earl of Sandwich has three location in Las Vegas. They have one at shops in Planet Hollywood, one inside Caesars Palace, and one just off the strip at the Palms Hotel and Casino. But for you late night partiers, The Planet Hollywood location is open 24 hours! This place has some of the weirdest hot dog combinations you can imagine, but damn they’re good!

And for those who are really cheap, Haute Doggery has an old-school Las Vegas favorite, the $1 Shrimp Cocktail!

So where is Haute Doggery located?

Haute Doggery is located at the Linq at 3545 Las Vegas Blvd L-30, Las Vegas, NV 89109. They are open until Midnight throughout the week and until 2 a.m. on the Weekends.

Shake Shack: One of the Best Burger Joints in Vegas Hands down, The Shake Shack is one of the best burger places on the Strip! Why waste money at one of those fancy celebrity burger joints, only to wish you would have gone with the budget-friendly Shake Shack, and actually got something that was worth eating? Seriously, these burgers rock!

So where is Shake Shack located?

Shack Shake is located right in front of the New York-New York Hotel & Casino at 3790 S Las Vegas Blvd, Las Vegas, NV 89109. They are open until Midnight throughout the week and until 2 a.m. on the weekend. That being said, it’s not uncommon to see a line out the door well past closing time!