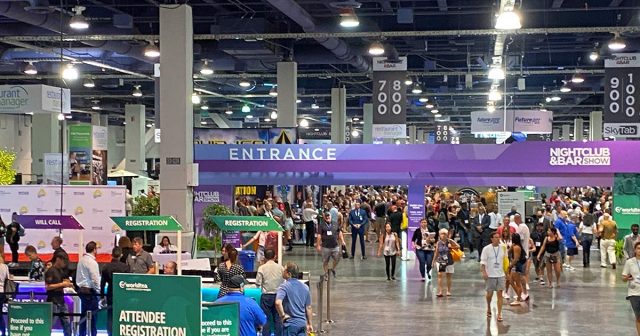 Last Monday, another one of our top shows made its way back to Las Vegas for a slightly smaller summertime show.

After having to postpone their annual industry trade show multiple times over the last 16 months, the Nightclub & Bar Show returned to the Las Vegas Convention Center, providing a badly needed boost to our tradeshow economy. The show, which was noticeably smaller than past years, was still a ray of hope in what has been a very dark year for our city.

While much smaller, this was the closest thing to a normal show that we’ve been to since conventions were allowed to open again in early June. Unlike many of the other returning shows, the Nightclub & Bar Show spared no expenses and went full throttle with multiple after-hours networking events and parties – after a two-year hiatus thanks to the Sisolak shutdowns, there was a whole lot of pent up demand and you could really feel it for the attendees who made the trek out to Vegas.

Can Conventions still save Las Vegas?

Unfortunately, when COVID hit and Governor Sisolak decided to kill our convention industry, allowing Florida and Texas to permanently scoop up many of our shows, we went from covering our one-of-a-kind business environment to reporting on the destruction of our once-great city.

But with the return of conventions, especially the types of crowds we saw coming back for the Bar & Nightclub Show, we did feel a sense of hope. In the areas around the convention center, it was almost as if we had our city back – almost!

While we experienced a number of trouble spots on the strip during the show, if you managed to avoid the No-Go zones, and stick to areas where tradeshow attendees were gathering, the difference in the crowds and the attitudes was night and day.

As we’ve talked about for over a year now, WE NEED THESE SHOWS TO KEEP COMING TO VEGAS. They are literally the only thing that can save us, and help our city regain its former glory. Business and trade show visitors are among the most important tourists in Las Vegas, spending 18 percent more than pre-covid leisure travelers on average, according to the Las Vegas Convention and Visitors Authority.

On the heels of its return to Las Vegas, the Nightclub & Bar Show announced that the annual convention will evolve to become the “Bar & Restaurant Expo”.

“This rebrand will open the door to the vast food and restaurant segment of industry and allow us to explore new opportunities in the food and beverage industry,” said Tim McLucas, vice president of Bar & Restaurant Group. “As the bar, nightlife and restaurant business authority, the repositioning to Bar & Restaurant Expo allows us to create new opportunities for important business growth tied to new customer expectations and an enhanced guest experience.”