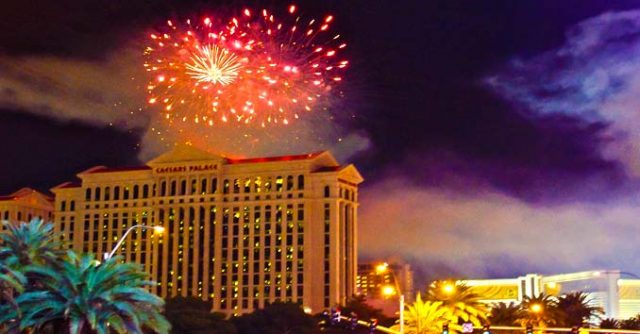 New Year’s Eve in Las Vegas is like nothing else in the world. From firework shows and a never ending list of parties to rubbing elbows with A-listers and celebrities, Las Vegas is the place to be on Monday, Dec. 31, 2019.

The Big Events: Rocking in 2020 at the top NYE Events in Las Vegas

If you are looking for the ultimate place to ring in the new year, then there are two main places to look: The Fremont Street Experience and the Las Vegas Strip. Not only will you find a majority of the top parties and events, but come midnight people will stream into the streets to ring in 2019. This is definitely a local’s favorite! The Fremont Street Experience NYE Party is the ultimate New Year’s Eve street party. Party guests will enjoy a dozen live bands playing all the covers you know and love.

America’s Party Downtown, taking place Saturday, Dec. 31 from 6 p.m. to 3:30 a.m. is a rocking night filled with dozens of bands on three stages, drinking, and 25,000 people who know how to party!

America’s Party: Countdown 2020 on the Strip At 5:00 p.m. on December 31, 2019, Las Vegas Blvd. closes to all vehicle traffic and becomes center stage for one of the country’s top New Year’s Eve events and open air party spots.

The Las Vegas Strip Casinos host hundreds of parties and events on New Year’s Eve. Come midnight the entire strip is taken over by party goers who stream out into the streets to watch the fireworks show, fired from the roofs of 7 Hotel Casinos including the MGM Grand, Aria, Planet Hollywood, Caesars Palace, Treasure Island (TI), The Venetian and the Stratosphere.

Stratosphere Party: One of the only spots where you can get a 360 degree, unobstructed view of the Las Vegas Strip Firework Show!

Open bar all night! Ring in the new decade at Rockhouse with several hundred other people partying and having the time of their life.

Eiffel Tower NYE Party
Once on the observation deck, you will encounter a breathtaking 360 degree view of the Las Vegas Valley and one of the best spots to watch the Fireworks.

Five Parties at the Cosmo! The Cosmo is hosting five different NYE Parties. Kick the weekend off early with Ariana Grande and finish things up while ice skating under the fireworks show!

Other Locations on the Strip