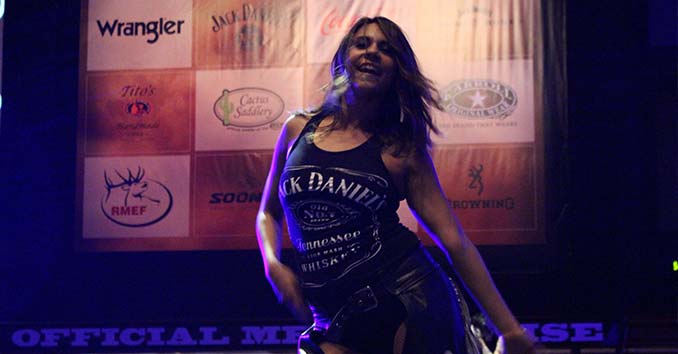 The NFR’s official after-party, Rodeo Vegas is one of the top events during NFR, and is always a good time!

Every night throughout NFR Rodeo Week, The Mirage transforms their Sports Book into a Desert Honky-Tonk. Enjoy the best FREE live entertainment from country music’s biggest stars, rodeo drink specials every night, December 1 – 10, starting at 9:30 pm in the Mirage Race and Sports Book.

Shows at the Sports Book

December 1 & 4
Over the last 18 years, Casey Donahew has risen from a favorite on the local Texas music scene, racking up 21 #1 singles. His current album ONE LIGHT TOWN, garnered Donahew his latest #1 single, “Let’s Make A Love Song, which was the #1 most played independent song on country radio for 2019.

December 2
ACM New Female of the Year 2022 winner, Lainey Wilson has earned the enthusiasm of the industry, having been named to nearly every “Artist to Watch” list, winning MusicRow Magazine’s Discovery Artist of the Year award and being crowned Billboard’s “Top New Country Artist of 2021,” the Louisiana native is one of Nashville’s hottest and most buzzed-about new artists.

December 3
A staple in the Texas music scene since forming in 2006 at Lubbock’s Texas Tech University, the Josh Abbott Band has become an icon in the lone star state. Two of their projects, Small Town Family Dream and Front Row Seat, scored top 10 debuts on the Billboard country albums chart, while five titles cracked the Billboard country singles lists.

December 5
Powerhouse vocalist kickstarted her career at just 16-years-old as Season 4 winner of The Voice. She has released IN BETWEEN: THE COLLECTION (Big Machine Records) featuring 10 tracks representing the different chapters in Danielle’s musical journey, including brand new track “Look At The Mess I’m In,” and “Stop Draggin’ Your Boots”.

December 6
His legacy began to unfold as he shared the stage with his late father, Dwight Templeton, a veteran and country music recording artist. Glen sang at the VFW in Cottondale, Alabama before chasing his dreams to Nashville, TN. Glen went on to perform and record his own version of his father’s charting single, California

December 7
The Randy Rogers Band was founded in San Marcos, Texas, and has spent the last 20 years bringing the Texas Country tradition to dedicated fans around the nation and beyond. The band has charted seven singles on the Billboard Hot Country Songs chart, two Top 10 hits at national Country radio and numerous Texas Country Radio chart #1s

December 9
A native of small-town Kentucky, just celebrated multiple milestones with his hit single “My Boy” topping the charts at country radio and being certified GOLD by the RIAA. Shane’s new single “County Roads” is officially available at country radio now and was one of the most added songs at country radio upon release.

December 10
Breathing fresh Rocky Mountain air into the Nashville music scene, Ian Munsick is pioneering a new brand of country. The recent releases of “Long Live Cowgirls” (with Cody Johnson) and “More Than Me” are ushering in the next chapter of his musical saga.

Nightly
DJ DU was a pioneer DJ/ Producer to introduce a unique blend country and top 40 dance music to fans across the nation. Du also has hosted “The Morning Blend” on SiriusXM’s The Highway with Storme Warren.