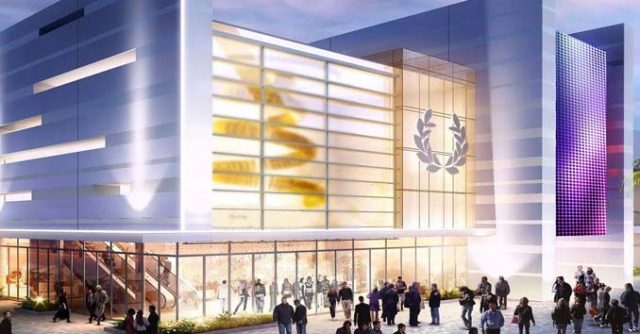 The 550,000-square-foot Caesars Forum Convention Center is being built behind the LINQ, Harrah’s and Flamingo and will connect with them via walkways. Caesars Forum is expected to be completed in 2020 and will feature 300,000 square feet of sellable meeting space and a 100,000-square-foot outdoor plaza for receptions or break space.

“Consistent with our post restructuring plans, Caesars Forum is the first installment of our growth strategy for the benefit of Las Vegas and our employees which will also help meet the increasing demand for group business meetings of all sizes,” said Mark Frissora, President and CEO of Caesars Entertainment.

As part of a series of transactions with VICI Properties, Caesars Entertainment recently announced its intention to acquire 18.4 acres of land as part of its plans to develop this new conference center.

“We are excited to be investing in the meetings business in Las Vegas as we continue to see this industry as a strong driver for Caesars Entertainment and our city,” said Bob Morse, President of Hospitality with Caesars Entertainment. “With its mid-strip location and state-of-the-art design, the Caesars Forum will be the ideal location for anyone looking to host meetings and events in Las Vegas.”

Current Convention Space is Running Out!

According to a January report by Morgan Stanley, Las Vegas Convention Space is at peak utilization rates of about 75 percent. In fact, the number of convention attendees traveling to Las Vegas has risen nearly 50 percent since 2010, leaving Casino operators rushing to expand their convention spaces.

A look at CAESARS FORUM