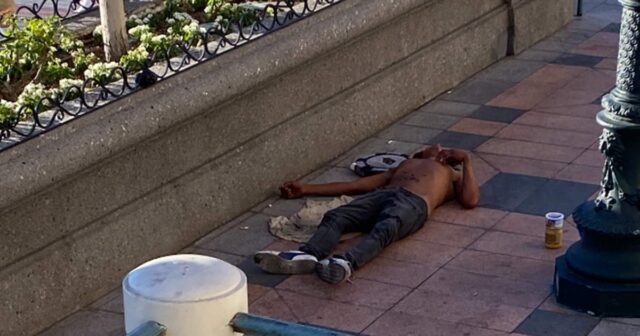 Over the last three years, Las Vegas has descended into an absolute warzone with nightly attacks on tourists and violence spreading into residential neighborhoods throughout the valley. So while the media temporarily pretends to care about the eight people who were brutally stabbed yesterday by an illegal alien on the Las Vegas Strip in front of the Wynn Hotel and Casino, the fact is this is no surprise to anyone, despite what the paid of Las Vegas Media may try to sell you. In fact, this is an almost daily occurrence now in Las Vegas – it’s just not talked about!

Three nights before the stabbing, we actually tweeted our criminally negligent democrat governor warning that this exact area where the stabbing occurred was a disaster waiting to happen. Homeless camps had begun to pop up nightly surrounding the Wynn and the Palazzo casinos, and mentally ill addicts were creaming at tourists threatening to murder them – no one did anything, including Metro or Casino Security.

Man Beat to Death with Cinder Block Outside Mandalay Bay

Just a couple of days earlier, another mentally ill criminal who was allowed to wander the Las Vegas Strip unchecked, preying on tourists, and looking for his next victim, found just that. Malik Price, 27, beat a man to death with a cinder block right outside Mandalay Bay Hotel and Casino. The story didn’t make the national news; hell, it barely made the local news because our media routinely covers these crimes up and helps the casinos and the democrat party bury them, never to be seen again.

Operation Las Vegas: A democrat war against the People!

From Clark County democrats killing reporters in the streets to Las Vegas to Raiders players being allowed to terrorize our town without fear of being charged, the democrats who run this town are not only soft on crime; they seem to actively side with the criminals. I mean, how else could you explain our democrat Clark County District Attorney letting a 9-time felon with 82 arrests back on the streets so he could shoot up a black-only club in Las Vegas — yes, that’s how bad Las Vegas is, they actually allow blacks-only clubs with no licenses to operate without fear of authorities shutting them down.

While the media ignores the problem, and conventions cancel left and right because they fear sending their employees into a warzone, major areas of the Las Vegas Strip have become No-Go Zones taken over by gangs and homeless addicts on the strip. Things have gotten so out of control, that these mentally ill psychopaths actually stream themselves on YouTube, threatening to kill tourists on the Las Vegas Strip!

Why are MGM and Caesars Welcoming the Crime?

Since the start of the Steve Sisolak shutdowns and targeted destruction of our economy, Las Vegas has turned into an absolute warzone. Yet, oddly, the mega-casino corporations that run our town seem to not only be complicit in the destruction but actively help cater to the criminals who have flooded our town.

Here are just a couple of the large-scale riots and murders at MGM properties since Steve Sisolak decided to declare war on our economy.

But these people are allowed to roam the strip, without fear of being stopped by casino security or Las Vegas Police:

The ghettoization of Las Vegas continues…

Tradeshow industry is collapsing because Nevada Democrats, MGM and Caesars Entertainment continue to cater to ghetto criminals! Who would want to do business here when this is a daily occurrence on the strip? pic.twitter.com/88OzQ2Puw4

This is what @SteveSisolak and @JoeLombardoNV have done to Las Vegas.

A once great town turned into a ghetto war zone with nightly fights and police that do nothing to stop it and casinos that cater to scum! pic.twitter.com/lEIOWhD4Mc

And then we have our schools!

Here is just a small sample of what Las Vegas Schools are like!

Couldn’t imagine sending my kid to one of these hellhole schools!

This attack popped up on social media last night. It is being reported on CCSD groups as happening at Las Vegas High School. No comments from @CCSD or police.

Save your kids! Pull them out of public school! pic.twitter.com/dxJfupfl6W

More fighting at Desert Oasis High School …. this is another one of the many fights on campus that the Las Vegas media won’t show you.https://t.co/D8PqsMq2zr pic.twitter.com/K8SM5Xzh13

How could this all happen? We let MGM install a Telemarketer who Stole millions from Tax Payers as our governor!

None of this should be shocking; after all, we live in a town run by criminals who would make the MOB blush and by COVID profiteers who got off on destroying lives and bankrupting small business owners. The corruption is so bad that Former MGM Resorts casino chief Jim Murren, who once bragged to a live audience that MGM Resorts ran the Nevada government, was actually made the head of Governor Sisolak’s COVID taskforce and was allowed to use the so-called pandemic to shut down his competition and enrich himself and his buddies at MGM.

After leaving MGM Resorts with a $32 million payout, and while serving on the COVID taskforce, Jim Murren teamed up with former Morgan Stanley veterans Edward King and Daniel Fetters to benefit from the destruction of Las Vegas as they formed a Special Purpose Acquisition Company (SPAC) to pursue potential deals in online gaming and buying up the bankrupt live event and entertainment-related businesses.

Andrew Pascal, former Wynn Resorts executive, nephew of Elaine Wynn, and a buddy of Jim Murren, used Murren’s influence to win a contract to make the COVID contract tracing app that helped shut down our state – he then used the shutdowns to help grow his online gaming company, all his competition was forced to close.

And then we have our governor, a man who made his fortune running a telemarketing company that scammed senior citizens and made his millions suing the county because, get this, the planes that took off from McCarren Airport were too loud inside his home.

But those crimes pale when compared to the shut down scheme and money laundering operation he and his wife, Kathy Ong, are running.

One look at Kathy “Ong” Sisolak’s client list is a look into exactly how so many Sisolak-associated cronies profited from the COVID shutdowns while Nevada’s small business owners went bankrupt. While the rest of the state was forced to shut down, Sisolak’s wife’s clients all managed to get specials permission to stay open throughout the pandemic. In fact, they not only stayed open, but many also profited off the shutdowns and helped to keep them going. We detail the entire scheme here.

These people literally killed our economy, flooded our town with California’s unwanted scum, methheads, and gang members, and have never once answered for their crimes.