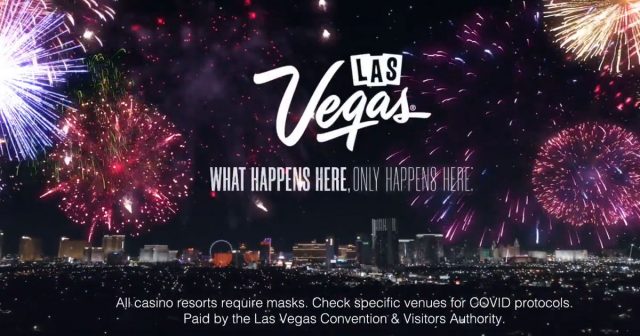 After the complete disaster of a campaign that used Social Media influencers to promote Las Vegas – unless you consider having an influencer who got national attention for assaulting an Uber Driver a success – The Las Vegas Convention and Visitors Authority is rolling out another R&R Partners tax-payer funded campaign, trying to convince the world that despite nightly stabbings, violence, bum attacks, idiotic mandatory outdoor mask mandates, and murders, Las Vegas is BACK!

“The new Vegas You campaign reminds travelers that Las Vegas is open, ready and excited to welcome them,” Kate Wik, LVCVA’s chief marketing officer, said in a Monday news release. “The Dance, the first ad from the new campaign, evokes the feeling of freedom that has become synonymous with the Vegas experience.”

Sadly, none of this resembles what tourists will really see under the democrat leadership of Steve Sisolak and the idiots on the Clark County Commission. Instead of spending millions of tax-payer dollars lying to potential tourists, tourists who will see a very different Las Vegas when they land, maybe it’s time to clean up the fucking streets!

The LVCVA is paying R&R Partners $110 MILLION a year, and the best these jerkoffs could come up with is a recycled slogan! Hmmm, let’s change “What happens here, Stays here” to “What Happens here, only happens here”… Real fucking talent over there, lets give them another 110 million tax payer dollars!

Maybe it’s just us, but when we’ve had two shootings in less than a week ( the deadly one across from Aria, and the one at The Flamingo) numerous unreported attacks by homeless drug addicts, a stabbing at the Cosmopolitan, criminal bike gangs attacking tourists and security guards, criminals trashing our infrastructure, BLM fighting with tourists, and a man being brutally beaten by a pack of thugs over a taco, maybe we should be pushing that LVCVA/R&R Partners money to the Las Vegas Metropolitan Police Department so we can FIX OUR CITY and not lie to tourists who will never come back after seeing Sisolak’s new Las Vegas!

I mean, do you think tourists who come here because of the new commercial are going to be back after they see what it’s really like?

On top of the deadly shooting last night, at least a half dozens fights happened on the Las Vegas Strip. Here is just one of them in front of Ballys pic.twitter.com/hepNr7H5fa

We want our city back, not stupid new slogans!

Cosmopolitan given approval to open at 100% after 80% of Employees to get the Shot!

8 Unique Las Vegas Experiences that are Hiding in Plain Sight