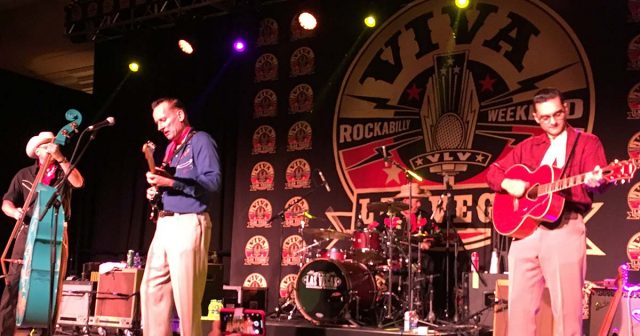 Taking a page right out of 1940s Germany, the progressive morons who run the Viva Las Vegas Rockabilly festival have announced that attendees will be required to wear ‘Vaccinated for Viva’ badges to go unmasked during their live music event at the Orleans.

Owner and organizer of the event, DJ Tom Ingram, took to Facebook to proudly announce the badge system.

He then went on to inform people who were thinking about attending the event that – even though he says he is fully vaccinated – he will also be wearing a mask for the entire summertime event.

These people are beyond brainwashed!

A number of former attendees who are part of the Viva Las Vegas Rockabilly Facebook group voiced their displeasure, most of their comments were immediately deleted and then after hundreds of comments were deleted, commenting was turned off – like all good progressives, dissenting speech is not allowed!

Among some of the comments were attendees who have been supporting the event for over 20+ years who started asking for refunds and telling Ingram that they would not support his fascist behavior. After being excoriated by hundreds of people who have supported the festival for decades, Ingram then posted “Let me straighten this out. We are not forcing anyone to show that they are vaccinated or not. It is very simply a way for those who are vaccinated to know who else is with a stylish badge”

But what he doesn’t say here is they are requiring it, anyone who doesn’t wear the 1940’s Germany style badge to show they are “clean”, will be forced to wear the compliance mask then. He then goes on to lie and say that it’s a policy at the Orleans, claiming they have their own badge system in place and make people wear stickers – this is not true at all, we’ve not only verified it in person but have spoken to Casino management who say they have no idea what Ingram is talking about.

Sadly, about half of the people welcomed the new rules, saying the pin will make it easier to identify their enemies so they know who not to talk to!

For the record we have attended this multi-day music festival in the past, we were planning on covering it this year, and we love most of the bands that play the show — we will no longer be covering this bullshit and will opt to see these bands at smaller venues that still value freedom!