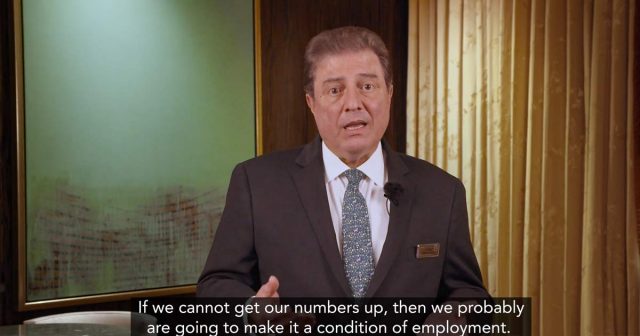 George Markantonis, President and Chief Operating Officer of The Venetian & Palazzo threatens workers in leaked internal video that if they don’t take the vaccine, he will make it a condition of employment!

George Markantonis, President and Chief Operating Officer of The Venetian & Palazzo threatens workers in leaked internal video that if they don’t take the vaccine he will make it a condition of employment!

Lies and says guests are demanding only vaccinated workers serve them! pic.twitter.com/bsL9yvTsOB

Markantonis then goes on and say guests are demanding to be served only by vaccinated workers, which is just beyond absurd and a bold face lie, considering they in many cases the people would have come to Vegas in an airplane where at least half the people were unvaccinated and then sit at table games, slots and restaurants full of unvaccinated guests.

If you think any of this is about health and safety, at the same time this was being pushed out to employees, the Venetian Social Media team was bizarrely promoting a gay Asian who was using twitter to try to trade sexual favors for luxury goods while at the Venetian. I get we are in Sin City, but keep in mind the Nevada Gaming Control Board banned Steve Wynn and took his Casino away over 20+ year old allegations that he slept with an employee, using a bizarre clause that says “all gaming businesses are run in a moral and honest fashion.”

Internal condition at the Venetian have become so bad, that workers are now using social media to snitch on other workers who they say are pretending to be vaccinated.

And now they have workers turning on each other….

We have become 1938 Germany. But don’t worry hypochondriacs, the Venetian is on it! pic.twitter.com/OOAcLW7jYM

Remember, last week we posted another leaked internal document from the Sands Corp proving that all of the current mandates had been planned weeks ago, and were coming straight from Governor Steve Sisolak’s office. In the memo, released on June 14th, the Sands Corp HR team tells employees that the “Governor of Nevada” has called upon tourism leaders for a coordinated response.”