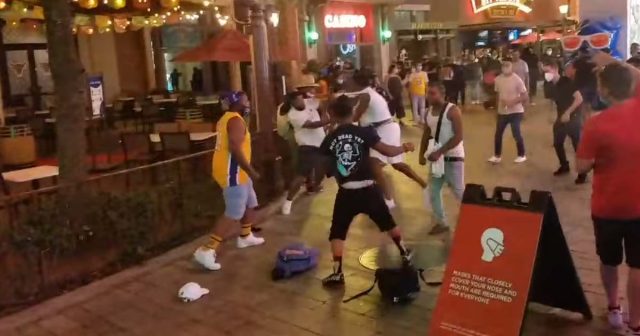 At 2:38 AM Friday morning gunshots were reported at MGM Grand; the start of another weekend of violence and chaos in Las Vegas.

Later that night, BLM thugs took to the streets blocking traffic and harassing tourists. Of course, our media was there for that, only they were not there to show you what was happening, yet again they reported it as “peaceful protests”.

BLM is now attempting to block traffic again on the Strip, and yet again the embedded dirtbags in our local Las Vegas media are making excuses for these criminals! pic.twitter.com/RRbeGtpjg8

BLM brought kids down to the strip tonight to help them block traffic… pic.twitter.com/QtVhzFE8Uk

Throughout the weekend dozens of fights, all unreported by our local media, broke out throughout the city. Followed by a stabbing on Sunday that lead to the death of a man staying at the The Grandview at Las Vegas.

Another night of mass-violence and fights on the Las Vegas Strip courtesy of Governor Sisolak’s New Approved Visitors! This is what the LINQ Promenade now looks like… pic.twitter.com/r6j3OgIywF

Not a shocker at the Siegel Suites… another one of the dozens of attacks this weekend, yet again unreported by our local media who can’t seem to find a camera crew… they must be busy promoting BLM riots again! pic.twitter.com/ccz4Z7L5HG

And to cap off the weekend, since I started writing this article this morning we experienced even more violence — two murders. One at the Grandview Resort at Las Vegas and another across the street at the South Point Casino.

Sadly, walking around in Las Vegas, especially on the weekends, is now probably one of the most dangerous things you can do in our once-great city. Gone are the businessmen and women, travelers, and gamblers coming here to spend money and enrich our city with their presence, replaced by ruthless thugs who come here for Sisolak’s newest approved sport – violence!