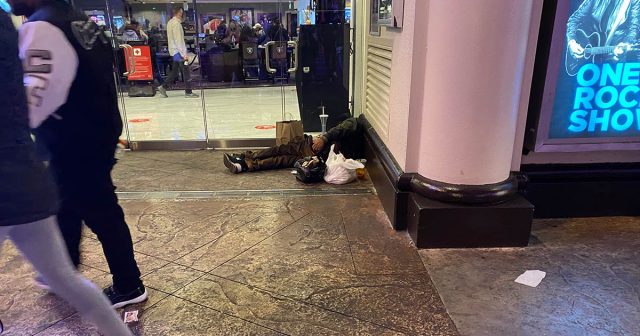 We are coming up on a year of shutdowns, and during that time the city, county, and state government has managed to crash our economy and turn our city into the new San Francisco.

From half naked bums sleeping in the doorways of Strip Casinos to people and animals literally shitting on the sidewalks, our city officials who claim to care about everyone’s health have turned the city into a disease-ridden hellhole that will scare off most normal high-end tourists, businesspeople and conventions for good.

Vegas is Becoming the New San Francisco: Homeless Squatters, Drugs, Feces and Filth. Why the hell are the Casino CEOs allowing this? Where are @CityOfLasVegas and @ClarkCountyNV officials? Is this what the @LVCVA thinks will bring tourists back? https://t.co/owaYN4IbAu pic.twitter.com/tTEPJm47tl

Just like San Francisco, that lost much of it’s convention business over the last decade due to the city’s “dirty streets” and “unsafe” atmosphere, Vegas officials seem to be following the award-winning tourism model of letting drug addict, homeless scumbags harass the hell out of tourists and take over the city.

Great job @CaesarsEnt way to make tourists want to come back to Vegas! Bang up job over at @ParisVegas letting bums sleep in the doorways and setup mini-bum towns on your property! Super WOKE! pic.twitter.com/5J4KLAdwUd

Homeless taking over the strip! Naked asses out laying in front of @HarrahsVegas … bang up job from @CaesarsEnt security and Las Vegas Metro standing 5 feet away allowing this in front of $billion resort! But keep@your mask up sheep! pic.twitter.com/AfBEGJUp0k

Homelessness, people blowing pot, meth and vape in your face, dirty streets, and the smell of filth are everywhere.

While Hotel security and Metro seems more concerned with yelling at people to pull up their masks in-between drinks, you probably have more to fear from drug needles, feces, piss and meth smoke than the magic fairytale virus!

Love what @CityOfLasVegas has done with the town! Great job Democrats!!!Homeless encampments in Las Vegas are now so prevalent that they set up tents at the Bank of America on Charleston and no one says a word! pic.twitter.com/rIVZOwm8JG