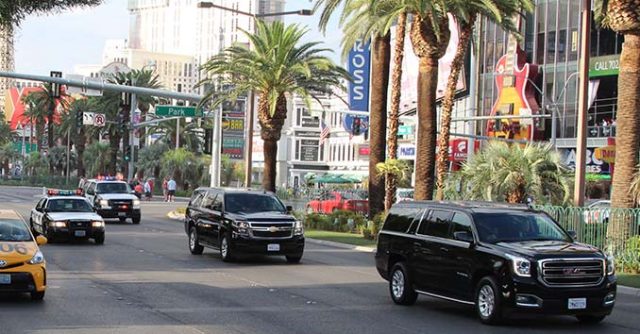 Republican presidential nominee Donald Trump flew into Las Vegas to meet with Mexican business leaders, in an attempt to shore up the Hispanic vote.

Trump arrived at the Trump International Hotel in Las Vegas shortly after 2 p.m., where he greeted supporters in the lobby, before meeting with about two dozen Hispanic leaders and small business owners.

“It was very productive and Mr. Trump is very invested in the Hispanic community out here,” said Charles Munoz, Nevada state director of Trump’s campaign.

Munoz declined to disclose further details about the meeting, including who attended, saying it was a “private, off-the-record” meeting.

On the way out of the meeting, business owner Irma Aguirre called it “amazing” saying everyone at the meeting talked about “the whole gamut.”

“We were happy to have him here, happy he’s reaching out,” Aguirre said.

Dan Scavino Jr., The Trump Campaign’s Director of Social Media & Senior Advisor, shared a picture of the meeting on Twitter.

A grand-opening celebration for the Trump-Pence Nevada Victory Headquarters is set for 10 a.m. to 2 p.m. Saturday at 1110 Palms Airport Drive, Suite 120.