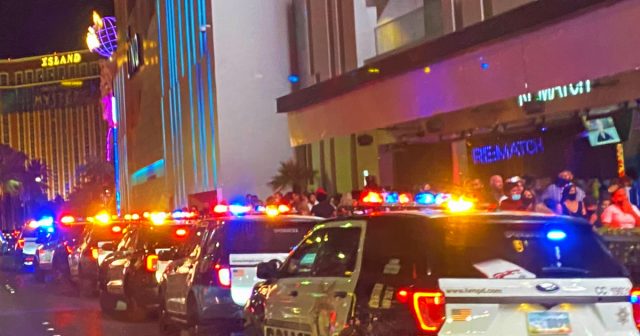 After a string of shootings to close out the year, it looks like 2022 is getting ready to be another deadly year for Las Vegas. Just a day into the New Year and Las Vegas has already seen three separate shootings, with someone killed in each shooting.

The first shooting happened just minutes after midnight. Las Vegas Metro officers responded to an alley near Ogden and 13th Street after reports of an unresponsive man. Police believe the victim was in an argument with a male and a female. During that argument, the male took out a gun and shot him dead in the alley.

Please see the attached document for more information on the homicide that occurred near Ogden Avenue and 13th Street.

Anyone with any information about this incident is urged to contact the LVMPD Homicide Section by phone at 702-828-3521 or @CrimeStoppersNV pic.twitter.com/lTLGBo9smf

The second murder happened around 11:26 a.m. on January 1st around the 3200 block of East Flamingo. Police say 68-year-old Glenn Wright shot and killed a woman at an apartment complex in the area.

Please see the attached documents for more info on the arrest of Glenn Wright (68).

Anyone with any info about this incident is urged to call LVMPD Homicide at 702-828-3521, or @CrimeStoppersNV pic.twitter.com/b9VsrRuq6K

The third murder happed late last night around 12:30 a.m. Police are investigating a shooting that left one person shot and currently in surgery at a local hospital and one person dead right down the road from the Strat near Industrial Street and Chicago Avenue.

The three latest murders come just hours after a string of shootings and murders throughout the Las Vegas Valley.

Please see the attached documents for more info on the arrest of Jesani Carter (20) and Jordan Ruby (20) for their involvement in multiple events on Dec 31, 2021.
Anyone with any info about these incidents is urged to call LVMPD Homicide at 702-828-3521, or @CrimeStoppersNV pic.twitter.com/09pvtGM3BE

The night of violence followed a violent month of December where we had a murder inside the Rio, a shooting inside Bally’s, a housekeeper killed at Bally’s, a man stabbed by a homeless man inside the Paris Casino, a man shot 11 times by a homeless addict in Chinatown, and countless assaults inside Casinos and throughout Las Vegas.