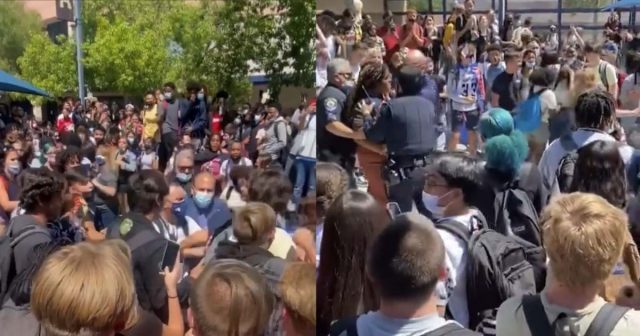 Over the last week, multiple students at both Shadow Ridge and Arbor View High school have been violently attacked for wearing American Flags and other Patriotic Apparel, and it seems much of the violence is being egged on by CCSD and School administrators.

Throughout the valley, patriotic high school students have been driving trucks to school with American Flags and wearing Flags, MAGA apparel, and other patriotic gear to school — many of them have actually been doing this for years. Apparently, the display of patriotisms is just too much for CCSD and administrators from many of our local Las Vegas schools.

Even before the violence started against these students, CCSD seems to have launched an attack on these kids, suspending many of them for wearing the flag, and stoking the flames of hatred by sending out emails and social media messages trashing these kids for loving their country.

In fact, earlier in the week, Principal Kevin McPartlin at Arbor View High School sent out an email to students comparing the American Flag to the Confederate Flag and saying he was working with CCSD district lawyers to try to ban these kids from driving trucks with American Flags and police flags, claiming they are racist and meant to “intimidate students of color.”

It seems school administrators care more about trashing patriotic students than protecting them, as they have been targeted in a ruthless campaign of intimidation and violence at multiple schools over the last week.

As @ClarkCountySch pushes CRT and “anti-racist” curriculum at tonight’s school board meeting… white students were beat and attacked at Shadow Ridge High School today for wearing American Flags! Of course, media is nowhere to be found again pic.twitter.com/YPDsKUmLOz

A parent of one of these students posted her story on social media saying, My son is a Jr at Shadow Ridge… his little group of friends and “like minded” have all been called in the deans and told, and I quote:“We will not tolerate any sort of republican political agenda supporters, NO American flags on your trucks and absolutely no Trump items of clothing, flags etc”!!!!

Another kid, posted anonymously on a Facebook group warning how bad things have got: Hello, my name is anonymous, I am a student at arbor view that started wearing the flags to school, I wore the don’t tread on me flag. I’m here to let all the arbor view parents that me and my buddies received a threat that they would shoot up the school and not stop til they killed on of us. I have already contacted the principal but I’m posting on here to let parents know that there’s a possibility of this happening. I don’t think they will because they are all talk but I advise to consider the possibility of this happening.

CCSD Pushes Critical Race Theory Curriculum in an attempt to Fan the Flames!

Last night Clark County School District Board members held a meeting to discuss implementing so-called anti-racism curriculum and policies at Clark County Schools — of course, the policies do nothing to address the white students who have been attacked and targeted in hate crimes for years by black students at CCSD schools. Instead, the policies are meant to demonize white kids, and teach things like the Arbor View High School Principal is preaching like how racist America and its values are.

At the meeting, mentally ill liberals attacked another man for wearing a flag outside the building. CCSD police did nothing, and can be heard in the video telling the man that it is his fault for wearing that “silly flag”.

Are these people all insane? Funny how the “anti” types are always the biggest bigots!pic.twitter.com/FmLciMZAWE

Inside the building, the Clark County School Board cut off parents they disagreed with, refused to let many of them talk, and even used the police to remove parents from the building for attempting to use their 1st amendment rights to fight for their kids.

Ironic that only certain people are allowed to talk at the Clark County School District Board meeting on “anti-racism” policy!

Board President Linda Cavazos not allowing a number of parents to speak and ordering police to remove them from the building. pic.twitter.com/qOXk7YyIFY

Clark County School District Board Meeting where they are trying to Push critical race theory and teach how white kids are racist! pic.twitter.com/TDuj64fH7i

Keep in mind, these fascists work for us! In fact, Clark County School District Superintendent Jesus F. Jara collects $435,768.00 a year in salary from “We The People”!

If you have a kid at CCSD, they are under attack. Arbor View High School Principal Kevin McPartlin isn’t the exception, he is the template they use to hire teachers and administration. Earlier in the week, Assistant Principal Kelli Sommer took to social media to call for the unvaccinated to catch COVID and “Die Quickly.”

Cimarron-Memorial principal Lori Sarabyn sent a memo to parents that the school and CCSD were aware of the post.

“The District is aware of social media posts made by a staff member and is working to address the situation,” the message said. “We appreciate your continued support and please feel free to contact me if you have additional concerns.”

A group of black radicals have been organizing groups of adults to “put boots on the ground” at these high schools to provoke children who are simply proud of their country. These people are absolutory bat shit crazy, here is one of their leaders posts basically admitting that they are triggered by children peacefully holding American flags! She says, “THIS IS WHAT WE ARE FIGHTING AGAINST.”