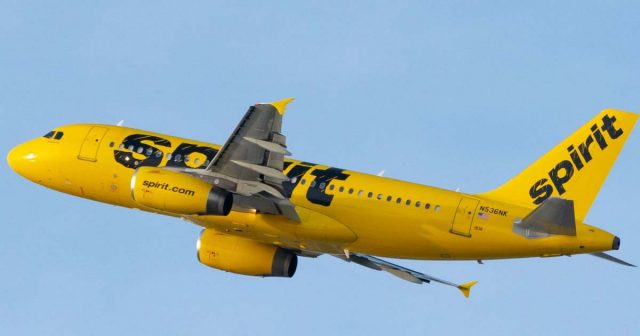 While all of the airlines are denying its dues to a pilot strike, thousands of flights from Spirit and American Airlines throughout the country have been cancelled and currently thousands of people are stuck at McCarran Airport in Las Vegas after the industry was hit with mass flight cancellations.

While the airlines are quick to say it’s not an official strike, it could be a Walk Out or protest at the very least as reports of pilots simply walking off their flight minutes before takeoff have been circulating for the last three days.

Spirit Airlines canceled nearly half its schedule for Tuesday, and almost all of its Las Vegas flights for the third straight day.

American Airlines had canceled nearly 300 flights by early afternoon Tuesday. American’s difficulties Tuesday came after the airline canceled about 560 flights, or 18% of its schedule, on Monday and nearly 300 on Sunday.

According to Spirit Airlines, who has cancelled hundreds of flights  “There is no strike,” Spirit representative Field Sutton said in an email. “I’m aware of the rumor of a pilot strike, but it’s 100% false. We have a fantastic team of pilots working very hard during this busy travel season.”

In a statement to the press Monday, Spirit said the airlines issues stem from ‘operational challenges,’ but would not clarify further.

“We’re working around the clock to get back on track in the wake of some travel disruptions over the weekend due to a series of weather and operational challenges,” the statement reads. “We needed to make proactive cancellations to some flights across the network, but the majority of flights are still scheduled as planned.”

The union representing American’s pilots accused the airline’s management of poor planning and not having enough employees.

“It’s pretty simple. They don’t have enough pilots, and they don’t have modern scheduling practices to do more with what they have,” said union spokesman Dennis Tajer. He said that bad weather “hits every airline, but American is the last to recover. This has to change.”

Six hours waiting in this nightmare line (8:30pm to 2:30am) before giving up and panic booking my own new flight to a much less convenient airport because people were reporting having to wait several DAYS to get a flight out of LAS. What a nightmare. #spiritairlines #spiritstrike pic.twitter.com/rs49zRUZYc

@SpiritAirlines this is not it. Waited at the airport from 3PM to 10PM just so you can cancel the flight. Then we had to wait to speak with someone at the ticket counter for 5 hours and we were not even close. Due to COVID, we decided to leave the airport and call. pic.twitter.com/ctGPFRDQc7

Spirit has canceled all of their flights out of Las Vegas and for most of the United States. I’ve been in line for 6hrs now and am finally 30 min away to talk to someone. That is the long line to get into the small line that I am in. Nobody should endure this. pic.twitter.com/h1t6LVYhM7

Lesson learned: DO NOT FLY SPIRIT ??????? We had a flight at 7:38 to DFW from Las Vegas waited about 1:30 hours after the flight till they decided to cancel the flight and made us wait for hours in a line of possibly 2,500 people if not more#LasVegas #spiritairlines pic.twitter.com/sNB12Ew1EQ

Widespread anger has hit the industry over the last couple of months as airlines mandate vaccinations, and unruly passengers and fights have plagued the industry.

Sisolak’s & Clark county COVID mandates have yet again killed business tourism and we now have the return of Ghetto Trash….

Las Vegas to Atlanta Fight on Spirit Airlines. No mask, no worry of Delta, or no consequences when your part of protected class! pic.twitter.com/zhd6hk4u4S

“Air rage” rising as the FAA reports nearly 100 incidents of unruly passengers in the past week. @VictorOquendo has the story. https://t.co/WvQlabpsyg pic.twitter.com/0xiLhfNgi3

See a pattern here? SMH
A violent fight broke out midflight on Spirit Airlines this week.

According to Flight Aware, 3,407 flights were cancelled yesterday.