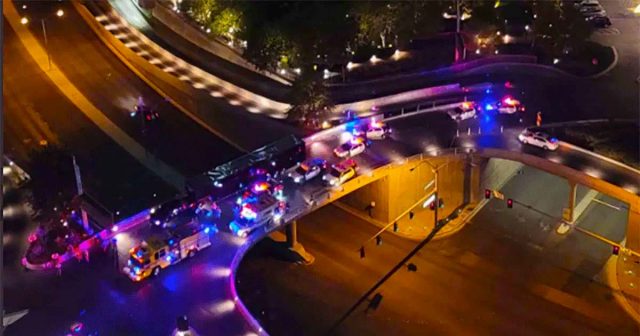 Last night the Las Vegas strip experienced yet another shooting in what is becoming an almost nightly occurrence thanks to a new type of visitor that has flooded our town – Ghetto Trash!

As our Governor bans conventions, the NFR Rodeo, Sunday church services, concerts, shows, and business events, the democrat socialists who run our state, county, and city government are allowing criminals to run wild throughout the city. Nightly beatdowns and assaults are now so common, that you cannot walk the Las Vegas strip without seeing at least a couple fights.

As businesses are targeted for shutdown over idiotic mask mandates, rappers and hip-hop celebrities are being allowed to throw gigantic lavish mask-free parties at restaurants and venues up and down the Las Vegas Strip – of course, you won’t hear about that on your local news, they somehow can’t seem to find a reporter with a camera!

Shooting outside Aria after Moneybagg Yo Party

Welcome to the Aria, one of the most upscale resorts on the strip that has now been turned upside down with nightly chaos.

The video below is the actual shooting outside of the Aria, where rappers were allowed to take over the valet area after partying in large mask-free groups throughout the town all night. They didn’t have to follow the mandates that locals are expected to follow. There were no shutdowns, the Clark County mask police didn’t show up, and Sisolak was perfectly fine with these mass-gatherings.

You can’t go to church, conventions, Concerts, or conduct normal business, but the people involved in this shooting and the nightly violence that has plagued our city for the last three months are allowed to do whatever they want thanks to the Democrats who run our town!

Imagine coming to Vegas, you make reservations at a nice restaurant. You show up and you are immediately assaulted by Sisolak’s mask police demanding the mask covers your entire face. How dare you put people at risk….

Your head is spinning, then you see that not everyone has to follow these policies. Certain people seem to be exempt. And now, you have to sit at what you thought was a five-star restaurant and hear and see this…

Right before the shooting, this is the rapper MoneyBagg Yo party and the outside of Aria – when you can’t go to Church this weekend remember that Sisolak and the Democrats allow this on the Las Vegas Strip every night — usually followed by mass violence and now shootings pic.twitter.com/CaSSdQIqe2