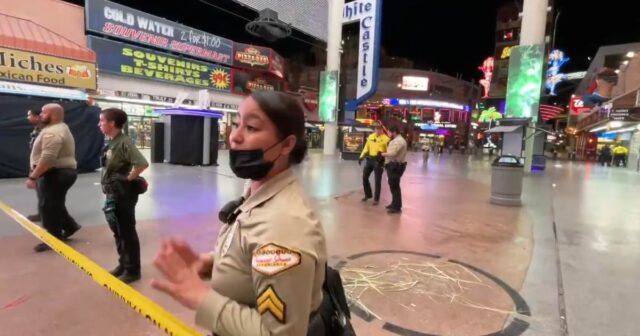 If you’re thinking about coming to Vegas, don’t – Nevada democrats have turned us into a third-world hellhole where you will likely be assaulted, robbed, or killed! This is not a pleasant thing to say when we run businesses that depend on tourist money, but unlike some lying local bloggers and journalists who are PAID to tell you it’s safe, we are not going to lie to people – VEGAS IS NOT SAFE!

Last night, there was yet another fight and shooting on Fremont Street in downtown Las Vegas.

While local media and police say a fight broke out between at two men in the area of 4th Street and Fremont Street last night around 12:40 a.m., our sources tell us that 10-15 gang members were involved in a huge fight and robbery before the shooting started. Several Casinos went into lockdown mode, and panicked police officers and casino security guards could be seen freaking out and running from the shooter. Unfortunately, despite all the cameras on Fremont and in the casinos, the shooter yet again got away from Las Vegas Police and is on the loose.

Videos of the robbery and the shooting on Fremont Street in Downtown Las Vegas over the weekend… these are organized street gangs that are only down there to rob, assault and commit crimes! https://t.co/5LZ6Mbrc6L pic.twitter.com/syJOBZbxXN

This follows a shooting last week, where a 16-year-old gang member who was let out of prison by our corrupt district attorney shot and killed someone right outside Binion’s Casinos in full view of tourists – a tourist was even hit in the crossfire!

Sadly, like every other night in the Democrat-run city of Las Vegas, this wasn’t even the only shooting. Just down the road, on Maryland and East Sahara Avenue, a man was shot outside a marijuana dispensary.  We would have reported on these shootings while they were happening last night, but we were suspended from Twitter for talking about this exact area and reporting on the illegal gay sex clubs and human trafficking in the Commercial Center District on Maryland and Sahara. Apparently, the businesses that promote human trafficking are allowed on Twitter, but talking to people about what’s actually happening is now HATE SPEECH!

But wait, there’s more. Around the same time last night, there was a third shooting. Police fatally shot a man last night near the 900 block of North Bruce Street, near East Washington Avenue, after finding a woman who had been fatally stabbed and a man holding an “edged weapon.”

The night before, a woman shot and killed a homeless POS outside of a 7-eleven  at 1601 W. Oakey Blvd., near Western Avenue and east of Interstate 15. According to police, her boyfriend, 42, got into an argument with a homeless drug addict while she was in the store. During the fight, the homeless drug addict stabbed the boyfriend. The woman witnessed the stabbing, pulled out a gun, and shot the drug addict.

While certain Locally and Vital Vegas bloggers are paid big money from the city and the casinos to lie to tourists and pretend Las Vegas is safe, the facts tell a different story. Night after night, people are being assaulted, robbed, and sadly even killed throughout Las Vegas. Oddly, it’s become somewhat of a tourist attraction for ghetto scumbags who are coming here specifically to party and live stream the chaos — that they see as a new form of entertainment.

This is the Las Vegas the local media and democrat politicians don’t want you to know about!

Another week of chaos in democrat run Las Vegas. I guess last week’s Fremont Street shooting and killing wasn’t enough to make @CityOfLasVegas @FSELV or @LVMPD do something to protect tourists!

Sorry to say Vegas is no longer safe or fun thanks to Nevada Democrats! pic.twitter.com/Tk4XglsSAF

This is what @SteveSisolak and @JoeLombardoNV have done to Las Vegas.

A once great town turned into a ghetto war zone with nightly fights and police that do nothing to stop it and casinos that cater to scum! pic.twitter.com/lEIOWhD4Mc

The ghettoization of Las Vegas continues…

Tradeshow industry is collapsing because Nevada Democrats, MGM and Caesars Entertainment continue to cater to ghetto criminals! Who would want to do business here when this is a daily occurrence on the strip? pic.twitter.com/88OzQ2Puw4

And here are just a handful of the stories we have reported on since the start of the year.