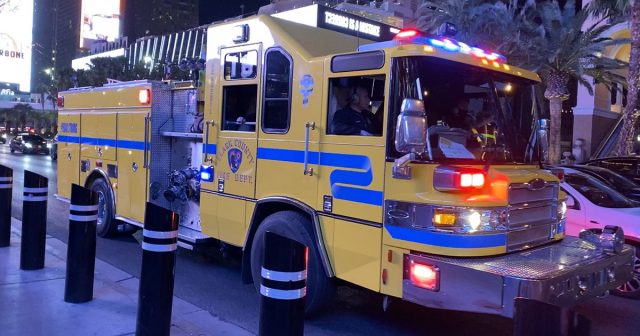 Las Vegas Metropolitan police are investigating a homicide that played out while officers were monitoring a real-time crime camera that was filming near the Flamingo on Las Vegas Blvd. Police say 33-year-old Brandon Leath, punched a man to death and then fled the scene on foot.

According to Las Vegas Metro homicide investigators, the victim was walking with a female on the strip shortly before 4:30 a.m, when Leath began shouting and following the couple across a pedestrian bridge. As the two were coming down an escalator near Flamingo, Leath ran down the opposite side and waited for them at the bottom.

When the couple got down the escalator, the argument heated up. Leath  then punched the victim, knocking him unconscious. Officers responding to the scene had the victim transported to Sunrise Hospital where he was pronounced deceased.

Leath was arrested shortly after he fled the scene and was charged with Open Murder and taken to Clark County Detention Center. Anyone with information about the incident may call Metro homicide investigators at 702-828-3521.

Pedestrian Bridges are a Hot Spot for Trouble!

Homeless drug addicts have taken most of them over, turning them into mini-tent cities where they can shoot up and harass tourists for money. It’s not uncommon to be verbally assaulted and followed while walking across these bridges.

While the local media reports these stories like they are some weird anomaly, most people who frequent the Las Vegas Strip know the pedestrian bridges have become a growing problem. From pimps and drug dealers trying to hard sell you out in the open to homeless addicts shooting up, shitting themselves, and screaming at you while you pass, crossing these bridges can be like playing a game of Russian Roulette.

These are the same scumbags we filmed overdosing in the doorways of Harrah’s the night before… it’s not hard for the media to find if they actually wanted to cover the problem… instead more tourists are assaulted and killed! https://t.co/qOLs7H4XcB

Violence and Chaos Engulfing our City

This is just the latest in a long string of violence and chaos that has hit our city hard since the Sisolak Shutdowns started back in March of 2020.

From gangs taking over entire intersections and neighborhoods with Sideshow chaos to bums literally sleeping and overdosing in the doorways of Strip Casinos, it seems Las Vegas officials and our Governor are resigned to turning us into the new Los Angeles.