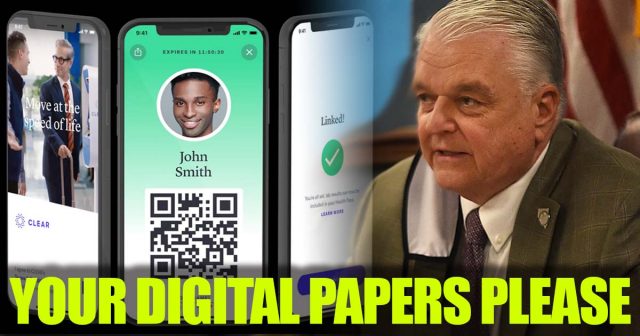 Throughout Nevada, major pressure is being put on smaller casinos to implement vaccine passports and mandatory vaccinations for employees. The casinos are feeling pressured into implementing vaccination programs, in order to compete with the strip casino giants who have been quietly building infrastructure to support vaccine passports for the last year.

Back in October of 2020, we warned this was coming and wrote several articles warning the public that Casino giants like MGM and Wynn were starting to build out infrastructure to push the vaccine passports. Wynn CEO Matt Maddox, as early as October of last year, was already bragging that Wynn had on-site laboratories and infrastructure built out in preparation for a policy that would require anyone attending conventions and events to have digital vaccine papers.

Maddox tried to sell his dystopian vision of Las Vegas, telling the wackos over at the Nevada Independent, “Imagine the following: Lionel Richie is playing at the Encore Theater at 7 p.m. Between 12 p.m. and 4 p.m. that day, you and your friends each provide a saliva sample at our on-property testing centers. The barcodes are scanned and you download the free UMC app and go about your day. All the information is hosted by UMC and the data is private. When the test results come back at 6 p.m., a negative test triggers a green light on the app and you can attend the show. And because the same process will apply, you can also head into a securely populated convention the following morning.”

During that same time last year, MGM proposed their “Convene with Confidence” plan which laid out how they would use biometric tracking, surveillance and testing as part of their future events and conventions.

“The health and safety of all who pass through our doors is our highest priority. Convene with Confidence represents the culmination of everything we’ve learned, cutting-edge technology and months of consultation with experts,” said MGM Resorts CEO and President Bill Hornbuckle. “With this program, we are taking another step forward in safely providing a level of entertainment, amenities and service not seen since before the pandemic began.”

Yesterday, the Venetian resort announced they had implemented Health Pass technology from Clear to accelerate the return of conventions and trade shows to the Sands Expo and Convention Center and the Venetian Congress Center.

In-person meetings and tradeshows are critical for their ability to drive commerce and networking,” said Chandra Alison, senior vice president of sales for The Venetian and Sands Expo. “As meetings safely return to Las Vegas, we stand ready to partner with meeting professionals to plan and host safe meetings, conventions, and trade shows. Through our Venetian Clean Commitment, we are proud to offer a product that addresses the safety of meetings and customers can book with confidence.”

“Across the country, Clear’s Health Pass is helping get people back to what they know and love,” said Seidman-Becker.

While the Venetian is refusing to say if Health Pass will be required to attend shows and conventions, the writing in on the wall. In fact, Governor Steve Sisolak and Jim Murren are using the Gaming Control Board to put major pressure on any Casino who does not implement the program and require their employees to take the COVID vaccine, reportedly going as far as threatening smaller casinos to limit casino capacity numbers until they get on board.

We’ve talked to numerous Casino workers over the last couple of weeks who say the pressure to take the vaccine has been growing, many telling us they fear losing their job if they don’t get the shot.

According to a memo sent to local casino owners, the Gaming Control Board is telling casino operators that they’re going to selectively raise capacity limits based on the Casinos Vaccination policy.

“We will carefully consider several different factors specific to licensee staff vaccination in deciding whether and to what degree to increase occupancy allowed in these areas of gaming properties above their current limit…of 50% of C/O.” … “Given current distinctions in how urgently licensees seek to vaccinate staff, there is a substantial likelihood that the Board will not simply move immediately to full occupancy for gaming floors for all licensees.” … “We will likely only increase gaming for occupancy in any meaningful way, including a move to, or near, maximum capacities, in cases where licenses have taken extraordinary steps to vaccinate staff.”

Back in December of last year, the Gaming Control Board was used to go after Primm Casinos who offered up private land for the 2020 SNORE McKenzie’s Mayhem Jeff Quinn Memorial race. Just hours before the outdoor desert race was set to start, Sisolak sent State Officials and Gaming Commission Goons who threatened to pull the casino’s licenses if the race wasn’t canceled. A month later, the Gaming Control Board was used to pressure casinos into canceling Super Bowl events.

Sisolak is never going to let this mask thing go…. Governor admitted he has no plans to lift the mask mandate, even after local governments get some control back in May… this is all about control! Vaccine passports coming! No working without the shot!https://t.co/LWBt7PMAZl pic.twitter.com/eqNL1TuMw3

We’ve been covering Sisolak’s tyranny and how he is using the COVID taskforce to target his enemies and allow friends like Jim Murren to bankrupt his competition and then buy these businesses for pennies on the dollar for months now.

From pushing for the corporate takeover of Nevada by allowing corporations to start their own company towns to letting his friend Andrew Pascal get rich off of the shut downs he helped push with the COVID tracing App, Sisolak seems hellbent on using the so-called COVID pandemic to help push his agenda and enrich his friends and family.