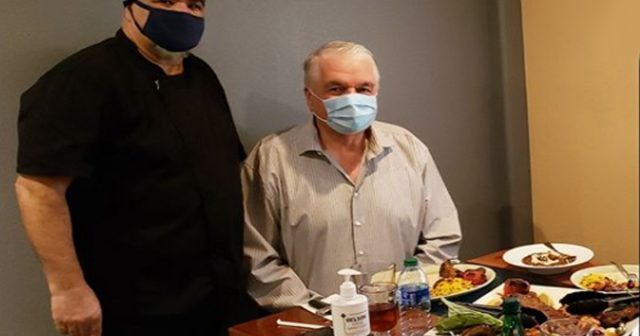 After demanding Nevada residents stay at home for the next two weeks, telling us we have to stop going out into public and instead order our food via delivery, King Sisolak mocked the public, taking his fat ass to a local Las Vegas restaurant in violation of his own Stay at Home 2.0 Proclamation.

The Fuhrer @GovSisolak was violating his own Stay at Home 2.0 Proclamation today as he dined in public at Hafez Persian Cuisine in Las Vegas — he’s openly mocking you at this point! Anyone who complies with Stay at Home 2.0 is a moron! pic.twitter.com/8fq5m4Ro4Q

Remember, this is the guy who two days ago said to order curbside from your favorite restaurant and not to leave your home or sit inside a restaurant. But don’t take our word on it, take his….

Think about changes like ordering groceries for delivery instead of going into the store or picking up dinner curbside from your favorite restaurant instead of sitting indoors with others who are NOT members of your household.

No wonder he demanded us “bloggers” stop reporting on what he is doing!

Update: The local media is making excuses for the Governor’s hypocrisy claiming this is an old picture, basically calling the restaurant owner a liar, despite the restaurant’s original post saying it was from after Sisolak’s Stay at Home 2.0 Proclamation… All the photos have magically vanished from the Restaurant’s social media pages – it seems they have been ordered to take them down! Good thing we took screenshots!