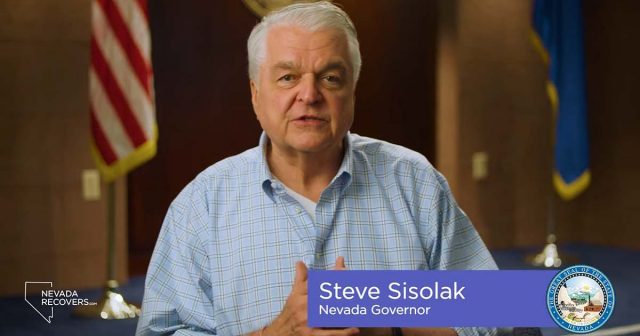 Make no mistake, this is the straight-up theft of Billions of American Taxpayer dollars in the latest illegal attempt to steal an election.

As part of the kickoff to this illegal use of taxpayer dollars to promote State Democrats over the next 2 months, Governor Steve Sisolak released what can only be described as a Democrat Election Campaign video, produced with your tax dollars, directly from a fund that is supposed to be going to Nevadans who were affected by the Democrat Pandemic!

How is this not a Democrat Campaign Video?

On top of the video, and the coming two months of illegal taxpayer funded campaigning, Sisolak and the Nevada Democrats used tax dollars to funnel money to their buddies over at Purdue Marion & Associates to build them a website promoting the Nevada Democrats illegal campaign — called NevadaRecovers.com. The democrat run Purdue Marion & Associates will also run point on PR and social media over the next two months — again, illegally using taxpayer money.

Bill Marion, principal and partner of Purdue Marion & Associates, is a big time Democrat donor who was the director of the Nevada state office in Las Vegas for Harry Reid from 1989 to 1992. He also served as Sen. Reid’s “special assistant” in Washington, D.C., from 1993 to 1998. In 2020, he was part of the Biden for President campaign.

Marion has also given political contributions to Dina Titus, Steve Sisolak and Las Vegas Councilman Brian Knudsen. Now you know why his company was chosen!

This is nothing but an attempt to funnel taxpayer dollars to democrat activist and buy your vote!

They are not only illegally using tax dollars to help democrats campaign in these bullshit townhalls, but they are attempting to use the billion of dollars in so-called emergency funds – YOUR MONEY – to buy off voters.

Nevada Gov. Steve Sisolak, Treasurer Zach Conine, and Congresswoman Dina Titus are set to go on a two-month “listening tour” to promote how they stole $11 billion in taxpayer money that they will now spread to special interest groups, climate change activists, and businesses who meet some arbitrary diversity measurement in an attempt to steal the next election.

“With this federal funding, we have an opportunity that we’d never had before, to fix systemic problems that have existed for decades., I am hopeful that everyone here today will help solve some of these long-standing problems in our state,” said Governor Sisolak Tuesday.

The corrupt Democrat party is using their henchmen in the local media to promote the illegal campaign. Back in May, Democrat propagandist Jon Ralston and the Nevada Independent allowed Steve Sisolak and Treasurer Zach Conine to write a propaganda piece as a springboard to use the American Rescue Plan Act money to help democrats get elected. In the piece, they promoted it with their new campaign slogan, “It’s time we built the Nevada we deserve.” Kind of sounds like they are attempting to coopt that whole MAGA thing that they claim is racist!