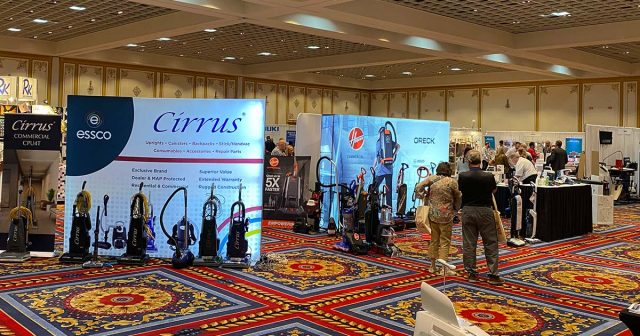 After coming off of the World of Concrete show, we wanted to see how smaller conventions and business seminars were doing in the so-called return to normalcy for the tradeshow industry in Las Vegas; while we are glad to be able to report anything after 15 months of closures, it’s apparent that Vegas has a long, long way to go before we can say “Vegas is Back”.

Over the weekend we attended the Vacuum & Sewing Dealers Trade Association Trade Show, and like many of the smaller shows that are starting to make their way back to Vegas, it was apparent that our business tourism industry is in for some major tough times as we try to gain back what we lost.

Mirroring what we experienced at World of Concrete, exhibitors were down – about 30-40% of what they would normally have – and attendees were also a fraction of what you would expect to see at one of these trade shows. That being said, everyone, we talked to saw the return of the show as a positive sign and across the board, the vendors we talked to said they would be back again next year.

Smaller shows are the lifeblood of our Business Tourism Economy.

Before COVID and the Sisolak shutdowns wreaked havoc on our economy, Las Vegas was seeing record high business and trade show travel. In fact, in 2019, 6.6 million convention and trade show attendees came to Las Vegas for business.

While larger shows like CES, SHOT Show, and World of Concrete often get the majority of news coverage in the valley, it’s smaller shows and seminars like VDTA/SDTA that really keep people working throughout Las Vegas. When attending World of Concrete, we noticed that they did not hold any major parties, or outside events this year. Even with the smaller crowds, the Vacuum & Sewing Dealers Trade Association did.

These types of events are vitally important and create a huge economic impact for Las Vegas. Business and trade show visitors are among the most important tourists in Las Vegas, spending 18 percent more than leisure travelers on average, according to the Las Vegas Convention and Visitors Authority.

Another issue facing many of the returning shows is the absence of international flights to and from Las Vegas, making it hard for international exhibitors to plan their return to these shows. It’s also another huge hit to our economy since international visitors stay longer and have larger gaming and non-gaming budgets.

During the VDTA/SDTA opening night welcome party, we talked to a number of local bartenders and service industry personnel that said they hadn’t worked in over 16 months. So while the local media keeps repeating the “Vegas is Back” mantra, the truth is Vegas will only really be back when our trade shows and business events are fully back!