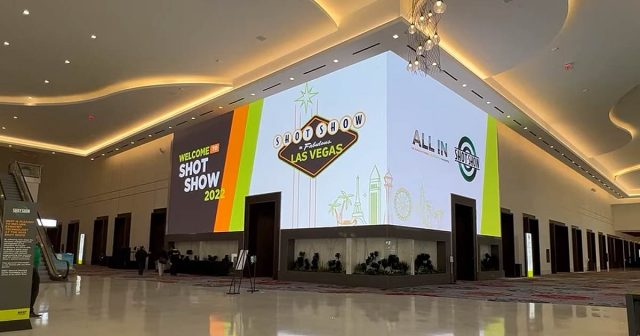 Governor Steve Sisolak is using the gaming control board and the CEOs of the top Strip resorts to push a campaign of intimidation and harassment, targeting those who are attending the NSSF SHOT Show in Las Vegas.

This morning, our sources at multiple casinos have told us that security teams have been told to crackdown on all SHOT Show people that they see without masks; in fact, they have again started to scream at people to pull up their masks in-between eating and drinking.

Keep in mind, these are the same casinos that can’t stop homeless people from ODing and setting up homeless camps in their doorways, but seem to have the time to harass gun owners over masks.

Unfortunately, the National Shooting Sports Foundation seems to have bowed down and caved to the pressure and this morning began threatening to remove people and exhibitors from the show floor for not wearing the compliance masks.

NSSF is threatening to kick exhibitors out of SHOT Show before the show even starts for not wearing masks!

All the Casinos got the Sisolak/Gaming Board Memo, expect to be harassed and yelled at throughout the show and inside hotel/casinos! #WEWILLNOTCOMPLY pic.twitter.com/r0ndCB28Ow

Anyone with the SHOT Show app on their phones received a pop up message warning them that they better wear their masks when the show opens on Tuesday.

Just before New Years, Governor Sisolak and the Gaming Control Board started threatening to suspend gaming licenses of businesses that didn’t enforce the mask mandate. Of course we know this is all political, after all, as we reported earlier in the week, there was a COVID outbreak at the fully masked, and fully vaccinated CES Show.

Because of the targeted harassment, a number of companies that have been at SHOT Show for over a decade decided not to attend, citing Sisolak’s mask policy as the reason for canceling. Keep in mind, we are losing billions of dollars in non-gaming revenue over mandates that are not being followed by the democrats who passed them!