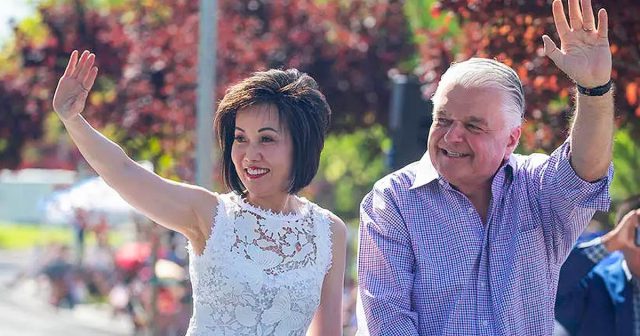 In the latest fake Asian hate crime promoted by our race-baiting governor, a Las Vegas man was released from jail and charges were dismissed today after a judge found that the entire so-called hate crime was made up and used by democrat politicians to yet again pretend there is an epidemic of white people attacking Asians in China town.

Anthony Dishari, who was slandered by our Governor and Nevada Democrats as a racist, is no longer facing charges in a case that was labeled a hate crime. The case was dropped after surveillance video revealed that the entire thing was one big lie, made up to push the Asian Hate Crimes hoax.

Dishari, 36, was facing charges of battery and attempted robbery, after Nevada democrats claimed he yelled anti-Asian slurs at employees of a tea shop on S. Buffalo Drive and then attacked the owner outside the business and demanded the man’s gun.

Dishari’s lawyer Sean Sullivan said Dishari was jumped by some people after he left a bar and then was approached by another man with a weapon and a fight ensued.

Fortunately, surveillance video proved that not only did Dishari not yell racial slurs inside the business as Nevada Democrats claimed, but it was actually the owner of the tea shop who was the aggressor. Surveillance video showed the business owner pulling out a gun and firing a shot at Dishari. It actually looks like it may have been a hate crime against a white man, but of course our local media and the Nevada Democrats will never talk about that!

The judge apologized to Dishari and dismissed the case without prejudice. Our Governor and the Nevada Democrat party have failed to apologize to Dishari or the public for pushing yet another race crime hoax.

The Asian Community Development Council, a democrat front group who has been helping Sisolak push the Asian Hate hoax since he held a phony press conference last year claiming Chinatown was overrun with white people attacking Asians, helped push the latest hoax throughout the week.

The Asian Community Development Council is the same group that was caught throwing maskless parties for Democrats with the Governor’s wife.

Supporting our Las #Vegas #AAPI community. Cmsrs. @MichaelNaft and @JustinJonesNV joined @lvmpd and others to show of unity after a terrible attack. The manager of an Asian business was beaten and hospitalized. The suspect faces hate crime charges. #StopAsianHate #AAPICommission pic.twitter.com/aqRjccq1Yj

Last year, the @ClarkCountyNV passed a resolution condemning and combating racism, xenophobia, and intolerance against the AAPI community.

My colleagues and I firmly stand in solidarity with the AAPI community.

Hate has no home here.

It is critical that we hold perpetrators of hate crimes & attacks accountable — and that we continue working towards tangible solutions on bringing unity to the Silver State.

Tonight, please join me in praying for those at Cloud Tea and those affected by hate crimes everywhere.

Real People are being Killed! Why is the Las Vegas Metropolitan Police Department being Used to fight fake crimes in Chinatown?

For over a year now, the Las Vegas Strip has seen an unprecedented amount of violence, largely in part to the criminal gangs that now own the Strip and attacks from mentally ill, homeless drug addicts. Not once has Steve Sisolak, Dina Titus, or any other Nevada democrat held a press conference to address REAL-LIFE crimes, murders, fights and stabbings, and riots that occur almost nightly on the strip, on Fremont Street, and inside the Casinos!

In December, an actual brutal crime happened in Chinatown where a black man shot a Chinese waiter 11 times — oddly, the local media and the Nevada Democrats didn’t seem to label that one a hate crime.

During that same time period, we had a murder inside the Rio, a shooting inside Bally’s, a housekeeper killed at Bally’s, a man stabbed by a homeless man inside the Paris Casino, a man man shot and killed in the parking lot of Palace Station, a  woman shot in the chest and killed at Fashion Show Mall, Two people shot inside an arcade at Meadows Mall and countless assaults inside Casinos and throughout Las Vegas. NOT ONE PRESS CONFERENCE FROM OUR GOVERNOR OR THE DEMOCRATS!!!

But what’s really infuriating, is Las Vegas Metro has been ordered to play political theater in Chinatown, by sending saturation patrols into an area that isn’t experiencing problems, while pulling officers off the Las Vegas Strip and out of areas that are seeing record violence, shootings, and murders.