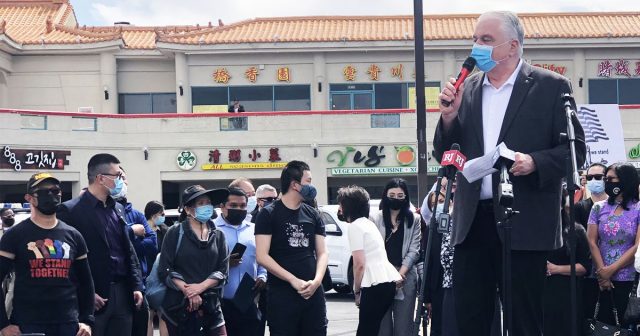 Governor Steve Sisolak, Dina Titus, and the Nevada Democrat party showed up in Chinatown today, with the rest of the liars in the local media, to yet again lie to the public and pretend there is an epidemic of hate crimes in Chinatown – there is not!

Not only is Chinatown doing better than most areas in Las Vegas, but as we’ve reported numerous times over the last year, businesses in the area have been given special treatment by the governor and the city and have been allowed to operate businesses that have been prohibited from operating in other areas of the city due to Sisolak “pandemic” shutdowns.

Apparently, Karaoke outside of Chinatown will kill you, but in Chinatown, you are perfectly safe and if you question the policy you are a racist!

The great State of Nevada has always been & will always be a safe and welcoming place for folks from all walks of life. Diversity is our strength in this State. #StopAsianHate pic.twitter.com/2MICnhP5P1

There is much work needed to be done in order to ensure the safety of our AAPI community here at home but today, Kathy & I were proud to stand with our community, committed to ensuring that we do everything we can do to stop Asian Hate in Nevada. #StopAsianHate

Of course, none of this is about “protecting Asians”, because in Las Vegas they really don’t need protection, this is just the Nevada democrats yet again trying to drum up bullshit outrage over an issue that doesn’t exist.

Real People are being Killed! Why is the Las Vegas Metropolitan Police Department being Used to fight fake crimes?

For over a year now, the Las Vegas Strip has seen an unprecedented amount of violence, largely in part to the criminal gangs that now own the Strip and attacks from mentally ill, homeless drug addicts. Not once has Steve Sisolak, Dina Titus, or any other Nevada democrat held a press conference to address REAL-LIFE crimes, murders, fights and stabbings, and riots that occur almost nightly on the strip, on Fremont Street, and inside the Casinos!

But what’s really infuriating, is Las Vegas Metro has been ordered to play political theater in Chinatown, by sending saturation patrols into an area that isn’t experiencing problems, while pulling officers off the Las Vegas Strip and out of areas that are seeing record violence, shootings, and murders.

The local media, Governor Steve Sisolak, and the COVID Taskforce will never tell you this — But, we will. If you are under the age of 40, you have a 323% higher risk of being murdered in the city of Las Vegas than dying of COVID!!!!

You would think that the “King of mask mandates” would look at that number and would be holding daily press conferences to address the real murders and crime problems in Las Vegas – he hasn’t said a word! Instead, we have theatrical political press conferences in Chinatown, talking about crimes that have yet to happen, while standing just feet away from the dozens of illegal brothels (Rub & Tugs) that operate in the area – oddly, Metro’s Chinatown saturation patrols seem perfectly fine ignoring those crimes!

When you are having your press conference just feet away from a dozen “massage parlors” that advertise and show up on Escort and Rub & Tug websites like Rubmaps, maybe you shouldn’t pretend you are upholding law and order! And if you are really out to “protect the Asian community”, why not address the human trafficking happening just feet away from your stage — do those Asian girls not matter?

Sadly this is not an April Fools Joke!

Record violence, nightly stabbings & fights on the strip; more people under 40 murdered in Las Vegas than died of COVID, and we have a governor who holds press conference on crime that never happened in Chinatown!https://t.co/DbmdraCuZk pic.twitter.com/C3QfFGVCkX