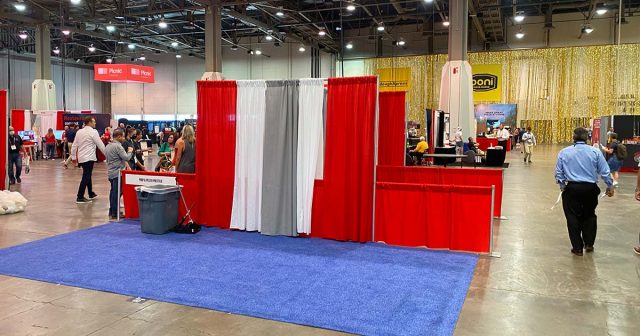 Earlier this week, we were at the Las Vegas Convention Center covering the International Pizza Expo. Sadly, just like the rest of our once-great conventions, the Expo was a shadow of its former glory. To the organizer’s credit, they did everything they could to make the trade show a success, they still planned after-parties, they ran their usual competitions, and they attempted to make it as fun as possible.

Unfortunately, when you are battling a governor who is doing everything he can to kill the trade show industry — passing idiotic mandate after mandate and trying to enact vaccine passports — there is only so much you can do to get people to show up.

While Sisolak’s henchmen in the local Las Vegas media used the show as a backdrop to push vaccine passports and never-ending mask mandates, the fact is, no one wants them. They have utterly killed the entire industry, and a vast majority of the vendors and attendees who would have normally been at the show stayed home due to the chaos and uncertainty our government officials have created.

Although official numbers have not yet been released, walking through the show floor was a painful reminder of how bad things really are. From dozens of empty booths and exhibitors who spent a fraction of what they would normally spend on both signage and marketing to a show floor that looked almost like a ghost town at times, the show appeared to attract only 10-20% of its normal attendance.

The Mask Mandates and the Threat of Vaccine Passports HAVE KILLED THE INDUSTRY!

For the sake of being transparent, last week we decided not to cover the show. Just like many of the attendees that stayed home, we just didn’t see the point of covering a food expo with the mask mandate in place.

But then we thought fuck it, we haven’t worn a mask since this thing started 18 months ago, what’s the worse that can happen, they deny us entry or kick us out? The mask mandate doesn’t stop us in our regular life so we figured we would give it a try.

Eureka!!! Not a single person said a word to us. Three straight days of walking the show floor, talking to vendors, eating, drinking, and NOT A WORD! In fact, by the end of every day, it was apparent that most of the attendees and exhibitors who did show up started to realize the same thing. There was nothing anyone could do if they removed the ridiculous compliance masks. And that is what happened, a large portion of the show either pulled down their masks or completely removed them — they were DONE with this bullshit.

Sadly, over 80% gave up before they even came. The prospect of having to wear masks in a 100+ degree desert and trying to conduct business at an expo where people are eating all day was too much for most to even bother.