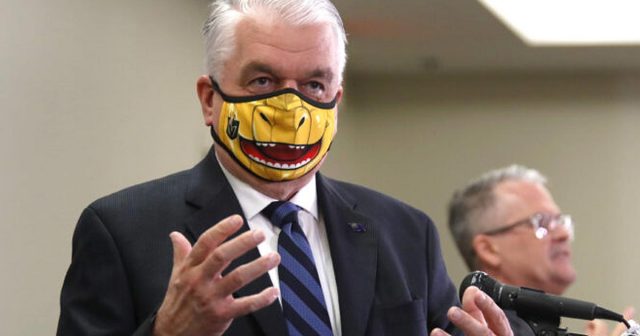 Nevada Governor Steve Sisolak is calling on all leaders in Nevada to condemn President Trump’s FACTUAL retweet of our tweet showing that the “Parking Garage Hospital” in Reno is empty and being used as a political tool to spread fear.

Today, I issued the following statement in response to a tweet from President Trump, where he agrees with the false claim that Renown Hospital’s alternate care site is “fake.”

My full statement is below: pic.twitter.com/6G1GqvDdRr

The tweet is factual! In fact, no one can dispute it. The beds have never been used and the real hospital is at historic low occupancy rates, despite what Governor Sisolak is calling a crisis. If the garage has patients in it, it is being done as an act of political theater, as Washoe County’s numbers show the hospitals are nowhere near capacity levels. The ICU is at historic lows!

But don’t take my words for it, just look at the County and CDC data!

On November 30th, Washoe Data says ICU Occupancy Rate are at 59% – a small fraction are COVID cases. Offical Data here: https://covid19washoe.com/press-release/298-new-covid-19-cases-4-covid-19-related-deaths-reported/
UPDATE: As the media goes into panic mode to cover up for Sisolak, the numbers have dropped again: As of December 1 2020, only 52 percent of all Intensive Care Unit beds are occupied! SOURCE: Press Releases (covid19washoe.com)

But accoding to 35 year’s worth of CDC data, Nevada’s normal Occupancy Rate is 69% – Even with COVID they’re 18 points below normal!

How is this a Crisis? The truth is, the parking lot garage is a prop that has not been used since it was staged back in April and will never be used because there is ZERO need for it!

“For nearly nine months, the State of Nevada has not only had to battle this pandemic, we have had to fight the President’s nonstop attempts to politicize a virus that has led to over 260,000 American deaths.

His consistent misleading rhetoric on COVID-19 is dangerous and reckless, and today’s implication that Renown’s alternate care site is a “fake hospital” is among the worst examples we’ve seen. It is unconscionable for him to continue to spread lies and sow distrust at a time when all Americans should be united during this historic public health crisis. Enough is enough.

Nevada’s healthcare professionals continue to work around the clock to provide life-saving care to Nevadans during this pandemic, including standing up an alternate care site in a parking garage to ensure access to medical care for all those who need it.

Renown Hospital has served as a pillar of strength for the Northern Nevada community throughout this pandemic, and especially during this current surge. Every day, their health care workers mask up, go to work, and care for Nevadans most in need. They too live with the fear of becoming infected and bringing this virus back home to their families, yet they have sat at bedsides holding the hands of patients so they wouldn’t have to be alone. They aren’t liars, as the President implied — they are heroes.

I call on all leaders throughout Nevada – regardless of political affiliation – to join me in condemning the President’s attacks on the integrity of our healthcare workers.”

Sisolak can cry all he wants, but the fact is the beds are wrapped in plastic and have never been used!

They suspended the account that posted it, but a guy in Reno was able to just walk-in to one of Governor Sisolak’s “emergency parking garage covid hospitals…and no one was there.

Sisolak just restricted us for 3 more weeks over a made up “crisis.”https://t.co/Sb9bXfEag1 pic.twitter.com/cqJMCIj7e6

Leaves for your tea as well.. 2 days ago @renownhealth pic.twitter.com/UG0X7DZvUE

$11 Million they paid for this shit! 11 Million!!! How many of you are still waiting on PUA? ? pic.twitter.com/T1dNlCU0WW

Of course, the scum bag propagandists in our local media are scrambling to stage photos showing that a single person is in the garage hospital – but if this is a covid ward, why would the patient not have a mask on? Would the media really be allowed in an infectious disease ward to “Take Pictures” This is a “super deadly” virus, but I guess the curtains will stop it!

This is Angie, one of the dozens of #COVID19 patients who has been cared for in the Renown parking garage (which is definitely not fake)

But according to recent videos shot by a patriot trying to discover the truth, after the photo op they caught them breaking down the equipment in the empty garage hospital!

What are the parking garage as usual it’s empty in one location to breaking it down and packing it up! Still sit in the parking lot posting this right now pic.twitter.com/RHqzAZyM23