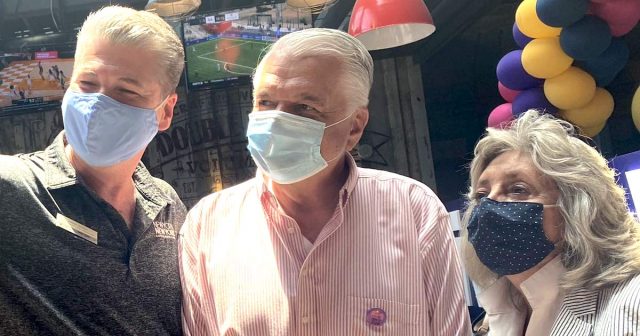 As the Sisolak administration uses Nevada Casinos to secretly push a new round of mask mandates and shut downs, the Governor is back to doing photo-ops with his mask.

At todays, VIVA VAX Vegas Day event, where MGM Resorts and the Nevada Democrats encouraged parents to vaccinate their kids in exchange for Casino prizes and Hotel Rooms at MGM properties, Governor Sisolak and fellow stooge Dina Titus pretended that they were back to wearing masks in public, despite both of them being caught just hours before in much larger crowds without them.

I met some great folks from all across the United State and even some international visitors at today’s #VivaVaxVegas event. The #COVID19 vaccine is free, safe and available to all those over 12. Vaccines will be offered until 6 pm at @parkmgm today. pic.twitter.com/gmL5lt1QVd

Oddly, while the Governor and everyone at the event was required to wear a mask, Hollywood celebrities were not. In fact, our Governor proudly posted a video of Brad Garrett mask free practically spitting into his camera.

I filmed this message from Brad Garrett, who attended today’s #VivaVaxVegas event & has a special message for everyone! pic.twitter.com/7flaUewVuv

And in case the brainwashed masses want to claim he only took it off for the video, here is Sisolak embracing him while he has NO MASK!

And Again with Titus…

So are Hollywood celebrities’ immune?

While the Governor, Titus and local Nevada Democrats all showed up pretending that they now wear masks again, just hours before Governor Sisolak was at a gay pride parade in Winnemucca with NO MASK!

And yesterday, after forcing Casinos to push a new round of mask mandates on their workers, he was posting pictures of himself on Twitter, without the mask in a room full of kids…

I would like to thank @BGCwin for having me and for continuing to empower all young people to reach their full potential, all while providing the utmost care and exposing them to a whole new world of opportunities. pic.twitter.com/dy6VT1ISIc

Of course our local media will never call him out on the hypocrisy, they are to busy taking his orders to push the next round of mandates and shutdowns! 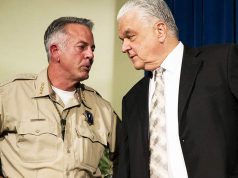