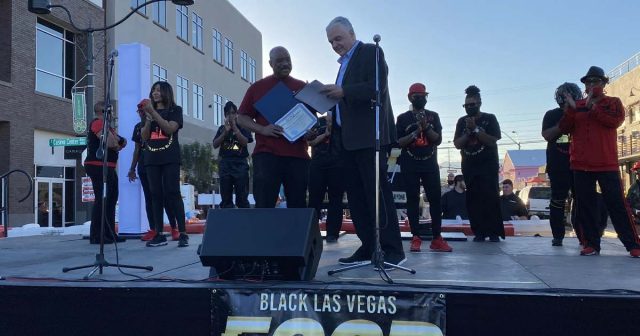 For the fourth year in a row, segregation reared its ugly face in Downtown Las Vegas as Democrat leaders hosted the so-called “Black Las Vegas Food Festival and block party.”

In order to be a vendor at the event, you had to have a “Black-Owned” business. Ironically, the racially segregated event did invite a couple of white people, oddly it was the same white democrat leaders who have helped hold their communities down for decades.

Democrat Governor Steve Sisolak and Representative Dina Titus were invited to speak at the “black-owned” only festival/block party, holding up a long democrat tradition of celebrating hate and racial divisions.

We recognize the need to support black-owned businesses, which are key to creating a stronger State for us all.

Small businesses are the backbone of our economy, and as Governor, I will continue to do everything I can to support black-owned businesses! pic.twitter.com/wWCTqgOyhJ

The event was started by Brian Harris, owner of The Blackbook. Harris is a known bigot who promotes racial segregation and sells Black Power merchandise.

Can you imagine if we were to host a “White Las Vegas Food Festival” and then banned black chefs?  Can you imagine if a Republican was hosting an event for someone who promotes, “White Power”? Do you think the local media and local democrats would be celebrating it the same way they are celebrating the “Black Power” “Black-Owned” event?