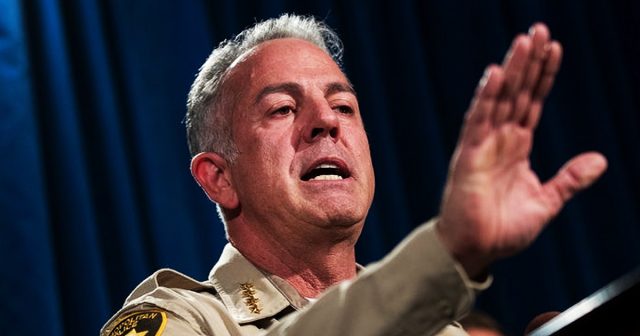 Las Vegas Metropolitan Police Department Sheriff Joe Lombardo, a man who has allowed our city to slip into a third-world style wasteland of criminal chaos, announced that he will be running for Nevada governor in 2022 as a Republican.

Last month, when rumors started swirling about his run for office, the Sheriff started hitting national media outlets, trashing his own police officers calling them lazy, and admitted that he was considering implementing mandatory vaccine policies to combat officers who refused to take the COVID vaccine.

Lombardo, who has done jack shit to stop 14 straight month’s worth of violence and murders on the Strip, and has even supported Sisolak’s efforts to pull officers out of areas with heavy crime and use them in saturation patrols of Chinatown so they can pretend they are fighting Hate Crimes, somehow thinks people are dumb enough to fall for his crap!

Here is a reminder of what the city has looked like for the last 14 months under the Sheriff’s leadership.

While Lombardo allowed his officers to be used as pawns in Chinatown — we had multiple shootings (the deadly one across from Aria, the one at The Flamingo,  the shootout near the Strat, and the shooting at the Hilton Grand Vacation Hotel.); numerous unreported attacks by homeless drug addicts; a stabbing at the Cosmopolitan; criminal bike gangs attacking tourists and security guards; criminals trashing our infrastructure; BLM fighting with tourists; and a man being brutally beaten by a pack of thugs over a taco.

And here are some other highlights from the last 14 months under Lombardo’s law enforcement leadership: