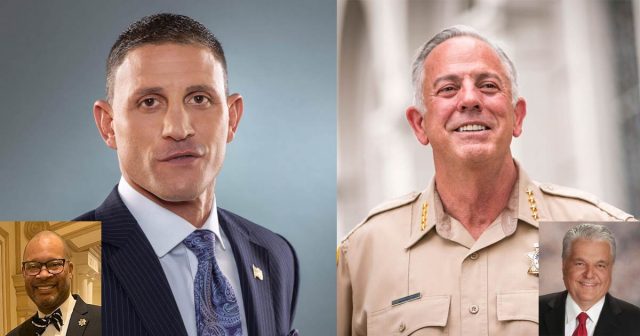 It seems the Republican primaries have been stacked with a bunch of phonies to help yet again steal another election. Over the last couple of days we have been researching some of these so-called Republican candidates, and found that two the leading Republican candidates for governor have a history of helping radical democrats get elected to office.

Our first phony scumbag is none other than Sherriff “No Show” Joe Lombardo a guy who has allowed Las Vegas to slip into third-world violence with nightly stabbings and shootings plaguing our once great city. According to Nevada Secretary of State records, Sherriff Joe donated $5,000 to help elect Steve Sisolak.

Joey Gilbert’s campaign is built around the whole Freedom of Choice and MAGA mantras; unfortunately, we’ve found some troubling contributions that seem to conflict with his campaign message.

According to campaign filings for the radical, convicted criminal and Democrat Attorney General for Nevada, Aaron Ford, Joey Gilbert was a campaign contributor on at least 3 different occasions.

While Gilbert makes ads denouncing Communism and Socialism, it didn’t stop him from donating to democrat socialist and one of the people who voted for the mask mandate, Clark County Commissioner Richard “Tick” Segerblom.

UPDATE: Response from Joey Gilbert where he admits the donating to democrats because they are “influential”… sounds an awful lot like someone is admitting to trying to buy politicians!

As a lawyer in NEVADA, I’ve contributed to issues & people who influenced the direction of policy ON BOTH SIDES of the isle. As most people who’ve lived here for decades recognize, DEMS have been in power, & Dems come in all shades blue to yellow; I’ll always BE a conservative.

I know you may be surprised to see that I’ve donated to several campaigns & issues that may be concerning. I understand. I honestly believed I needed to donate to the Dems because I knew they were influential. Clearly you guys wish I had not; I promise it will not happen again.

And just like a typical politician, while on one hand pretending to be ashamed of his donations, minutes later he attacked us and tried to claim we are tied to liberals — ODD SINCE HE IS THE ONE DONATING TO FUCKING SOCIALISTS!

Whoever is posting this may have an ulterior motive; I suggest we look at all the ties to liberals in NEVADA. I do see FIORE embroiled in an fbi investigation & Lombardo’s Oct 1 coverup/$ is BAD.

I know I’m a better leader & will not let these petty attacks chart my course.

No wonder @joeygilbertinc purged his old twitter posts — guess on top of fighting for Asylum seekers and donating to Socialists and the Criminal Aaron Ford, Joey Gilbert was throwing campaign donation fundraisers for democrats as well — OOOPS!!!https://t.co/1R8Xfj6tcR pic.twitter.com/odMwbumRiL

UPDATE: On top of donating to socialists and throwing fundraisers for the people who put the mask mandates in place, we have learned that Joey Gilbert and his law firm has been helping illegal aliens avoid ICE capture and tipping them off to coming ICE raids. He has also been donating to democrats’ for years so he could become a legal drug dealer, something his campaign is desperate to scrub from the internet!