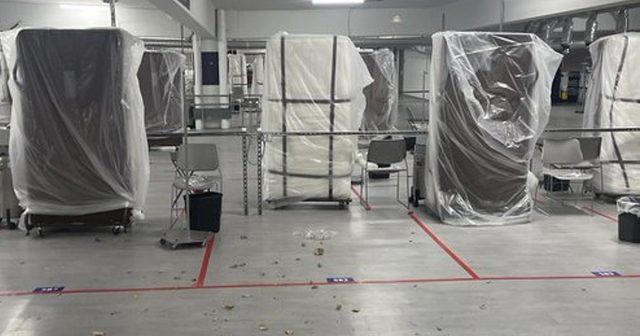 Over the last day, a shit storm has overtaken our Twitter feed, we’ve been inundated by mentally ill liberals claiming that we are lying about our coverage of the COVID-19 Hospital scam playing out throughout Nevada. It seems media throughout the world has declared that we are some sort of conspiracy site, claiming that Fact Checkers have confirmed the Renown Parking Garage Hospital is indeed real, even staging photo ops to prove patients are being treated in the third-world style hospital garage.

The problem is, the fact-checkers are full of shit.

None of these so-called journalists even bothered to check the so-called “facts”. In fact, the AP claims they tried to contact us but we didn’t provide a comment – that is a flat out lie from the so-called fact-checkers; we were never contacted by anyone from the AP or any other news organization for that matter – except for a single reporter from the Washington Post who contacted us minutes before their second article dropped (at the time we published this story, our comments have not been added to that WP article).

So let’s look at the Facts:

According to the Nevada Hospital Association, in Washoe County as of December 1, 2020, ICUs are at only 52% Capacity – Record Low numbers! But again, don’t take our word for it, or the “fact-checkers”, or our obese slob of a governor; Look at the Facts for yourself, here is the link: https://covid19washoe.com/press-release/7-covid-19-related-deaths-reported-in-washoe-county-285-total/

Statewide, hospital numbers are exactly where they should be — where is the so-called pandemic crisis?

And here is 35 years woth of CDC Data to compare it to: But again don’t take our words for it fact check it for yourself so you can see it came from the CDC and not us or the lying media: https://www.cdc.gov/nchs/data/hus/2017/091.pdf

Shouldn’t so-called FACT-CHECKERS be asking those question, instead of attacking us because President Trump retweeted our tweet?

If Renown is indeed using a parking garage to house patients, shouldn’t they be asking why, especially when the county data shows there is zero need? Shouldn’t these so-called fact-checkers be asking if this is medical malpractice, putting people’s lives in danger to justify spending $11 million on a parking garage hospital that was never needed?

Why would Washoe Need a Parking Garage Hospital?
County has at least 1,583 Beds https://t.co/7JNzCZvb90
Data shows 241 COVID Hospitalizations (most in for hours not days) But lets say they are all taking up beds, that means only 15% of beds are “Covid”! https://t.co/VKUA5oSsX9 pic.twitter.com/GtxlfkNrBQ

When Fact-Checkers and so-called “journalists” just make up stories:

The Washington Post has an interesting take on the story, instead of investigating the claims they have decided to smear patriotic Americans who dare question the narrative, saying, “The hospital’s auxiliary site has been the target in recent weeks of coronavirus deniers who have taken to social media to share a number of false claims about the site. Some posted, without evidence, about how visitors went to the site only to find no patients, which they used as an argument to claim the virus is a hoax.”

These people are full of shit!

Maybe they should apologize to the people who took these videos — you know, actual fact-checkers!

$11 Million they paid for this shit! 11 Million!!! How many of you are still waiting on PUA? ? pic.twitter.com/T1dNlCU0WW

What are the parking garage as usual it’s empty in one location to breaking it down and packing it up! Still sit in the parking lot posting this right now pic.twitter.com/RHqzAZyM23

They suspended the account that posted it, but a guy in Reno was able to just walk-in to one of Governor Sisolak’s “emergency parking garage covid hospitals…and no one was there.

Sisolak just restricted us for 3 more weeks over a made up “crisis.”https://t.co/Sb9bXfEag1 pic.twitter.com/cqJMCIj7e6

UPDATE: he “fact-checkers” are not happy with our story. In fact, it got our account on Twitter locked, our site got attacked last night, and we have been flooded with threats after MSNBC and CNN posted our account live on-air last night.

Twitter removed our link to this story and deleted our Tweet that President Trump Retweeted while allowing people to send us threats on their platform! Gotta love Big Tech!