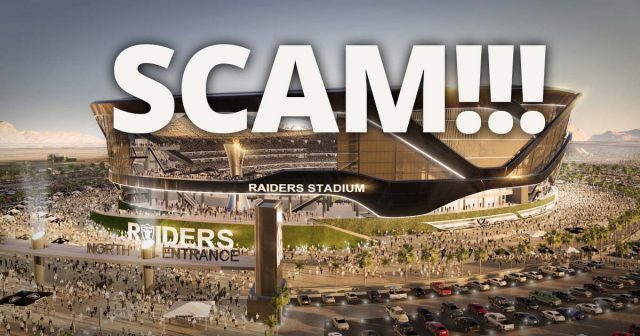 The $1.9 Billion Allegiant Stadium scam is yet again screwing locals, who learned today that parking at the stadium will cost them $75 to attend an event or game. The news comes as Clark County just had to tap an emergency reserve fund for the second time in order to make a $16.1 million debt payment on the Raiders stadium.

At $750 million in taxpayer dollars, the boondoggle of a deal was the largest direct public subsidy for a stadium ever granted, and Clark County is now struggling to pay the bill thanks to the Sisolak shutdowns that pretty much killed room tax revenue. Now, as we warned could happen back in 2016, it seems local taxpayers are going to be screwed as tourism tax revenue can no longer be counted on to pay for the stadium scam.

They always knew locals would be on the hook!

Back in 2016, well before anyone even considered an event like the great COVID shutdown scam, we warned people that the numbers were not making sense, and that eventually taxpayers were going to be on the hook for paying off the stadium. The bonds were issued as a general obligation of Clark County, meaning the County government pledged to use its full power of taxation to ensure the bonds are paid.

Keep in mind, our local politicians were so fucking stupid – and give so little care to the concerns of locals – that on top of saddling us with stadium debt, they also forfeited the right to collect any rent, solicit property taxes, or collect additional revenue streams from the stadium they spent three-quarters of a billion dollars to build.

The State of Nevada’s government officials also helped Las Vegas Raiders owner Mark Davis hide the terms of his loan from Bank of America from the public when they passed the legislation that created the $750 million bond via an 0.88 percent room tax increase. The bill included language that keeps the fine print of Bank of America’s loan a secret.

Per language in the legislation authorizing public funding for the facility, information the team demonstrates is “proprietary” or “confidential,” such as its finances, cannot be shared beyond the Stadium Authority.

“A big part of the information that the board will get will be confidential,” said Steve Hill, who chairs the Stadium Authority and leads the Governor’s Office of Economic Development. “The Raiders’ financial situation is not going to be a public document. We’ll get a framework for that at a board meeting, but the individual board members will get a more thorough briefing outside the public.”

Via the Nevada Independent

Even Bank of America knew the only way they would get paid was to screw Las Vegas residents!

It seems the State doesn’t want you to know that even before COVID, Bank of America was unsure the Raiders would ever be able to make a profit in Vegas and doubted they would draw the draw 451,000 new visitors every year that Nevada officials claimed.

Back in 2017, Roger Noll, Stanford economics professor emeritus, flat out rejected financial projections Nevada lawmakers used to pass the $750 funding bill. “It is a catenation of optimistic assumptions,” he said. “The probability that it could happen isn’t zero, but it is pretty close to zero.”

“Every single thing they made an assumption on has no prior experience anywhere else,” said Noll, director of the Program in Regulatory Policy in the Stanford Institute for Economic Policy Research. “In defense of it, well this is different because this is Vegas, therefore, it must be true.” … “Why would they go with this phony-baloney stuff that Vegas is different. Why would they believe a half a million who would never visit Vegas would suddenly show up because there is a football stadium? It’s so far out there it is a puzzle.”

This week we learned that for the second time in six months, Clark County had to pull millions of dollars from reserve funds to meet a payment on the Las Vegas Raiders’ one-year-old stadium — a stadium locals haven’t even been able to use due to the Sisolak shutdowns.

Clark County disclosed in regulatory filings that it will make an unscheduled draw of $11.7 million from one of the reserve funds backstopping the $645 million in bonds issued in 2018. A $16.1 million payment is due on the bonds for June 1.

“This action does not constitute a default and was expected in light of the decline in tourism to Las Vegas,” Clark County director of communications Erik Pappa wrote in an email. “Fortunately, the financing for the Stadium Authority bonds included the funding of a debt service reserve fund to weather economic declines like the one Las Vegas is currently experiencing due to the pandemic.”

In November 2020, municipal officials pulled out $11.6 million from reserves to meet the Dec. 1 semi-annual payment.

By the time the Allegiant Stadium debt is fully paid, Clark County will have paid $709 million in interest on top of the $645 million in principal for its financing of the scam stadium.

Back when he was County Commissioner, before he became one of the biggest Raiders cheerleaders, he admitted that he numbers made no sense. Sisolak told the San Jose Mercury News at the time that “Adelson said he couldn’t get a 2% return on his $650 million. That is $13 million a year. A regularly structured deal on $650 million amortized over 30 years, the principal is $20 million a year. With just a 4% interest rate it would cost an additional $26 million annually,” he said, “Where are they going to get $46 million a year?”

So why is he now onboard?