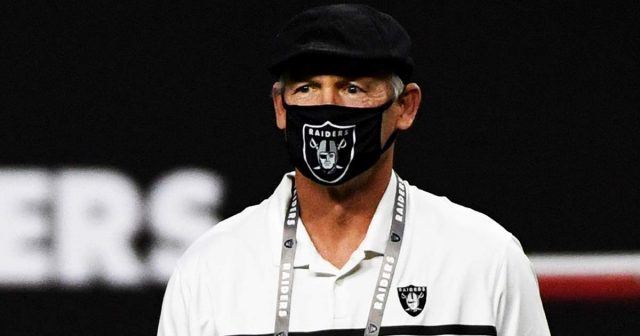 Raiders GM Mike Mayock has tested positive for COVID-19, despite the fact that the NFL is about to mandate vaccines and Mayock was already FULLY VACCINATED.

The NFL started putting rules in place earlier this year to penalize teams with unvaccinated players. If an unvaccinated player or staff member is shown to have caused an outbreak that forces a schedule change, the team experiencing the outbreak will be held financially responsible for the other club’s expenses, the memo said. If the game cannot be rescheduled, the team experiencing the outbreak will forfeit.

Las Vegas Raiders coach Jon Gruden, in a news conference in July, said every player had reported to training camp fully vaccinated “with the exception of four or five” players.

“So, we’re proud of that,” said Gruden, who reiterated that his entire coaching staff was also vaccinated.

Like a good little brainwashed propagandist, Mayock is using the new government approved talking point claiming he is so glad he got vaccinated, because he claims if he hadn’t things could be much worse.

These people are truly mentally ill. The masks didn’t work, the vaccine didn’t work, but they still can’t admit they were scammed.