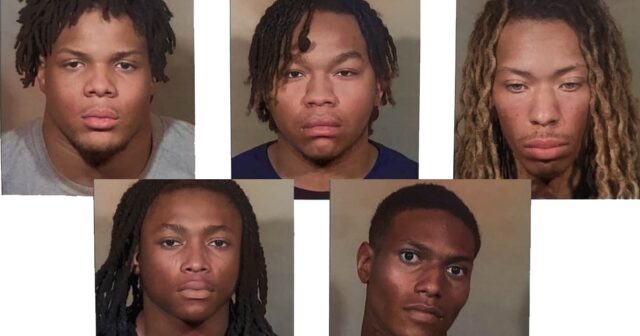 Back in June of 2021, we reported on a shooting that almost no one in the media wanted to walk about, yet another black on black gang related shooting in Las Vegas.

Today, Las Vegas Metro Police said they finally started making some arrests in relation to the shooting, where over 150 shoots were fired at people inside an illegal, underage twerking party at Pavilion Pool next to Palo Verde High School in Summerlin.

According to Las Vegas police, around 200 people illegally attended an unsanctioned pool party at the Pavilion Center Pool next to Palo Verde High School on May 30, 2021.

At the time, the media was oddly silent about what happened.

City staff told local news channel 8 that  “the pool was rented out for what was believed to be a family reunion. We found, however, that it was a party advertised with general admission.”

“We’ve got several investigative teams working this 24 hours a day to bring this to a resolution,” Metro Capt. Fred Haas, who heads the Summerlin Area Command told News 8. “We’re still trying to find victims and witnesses of this crime.”

“We have to make sure that these events are safe, not only for families that are having the events, but for the rest of the community, as well,” Haas said.

Councilwoman Victoria Seaman says the person who rented out the pool from the city did it under false pretenses.

“We take public safety very seriously, and we are going to get to the bottom of it,” she told the I-Team, “and we’re gonna find out what happened, so we can make sure it doesn’t happen again.” “These are not the type of events that we would rent out our spaces to,” Seaman affirmed. “These are for community, family events. Very disappointed.”

Our sources say employees quickly figured out what was going on, possibly days before the event, but feared charges of “racism” if they stopped the illegal event.

On Instagram and Eventbrite, a “Bancs and Spanks 3.0 Indoor Pool Bash” was advertised for Sunday, starting at 3 p.m. Numerous known gang members were promoting the event, including rappers, some degenerate named Lil Kayla (who sings about how her “pussy” doesn’t smell), some loser that calls himself “Obama’s Godchild”, and D-List Hip-Hop Reality TV trash like “Love & Hip hop Hollywood’s” Apple Watts.

During a news conference Tuesday, LVMPD Capt. Fred Haas said they have obtained indictments for five people in connection with the shooting for about 50 felony charges. The suspects are Demarea Wesley, Terrance Jefferson, Trayvon Ward, Michael Simmons and Cedric Sweeting.

Police are asking for the public’s help in locating Michael Simmons and Cedric Sweeting, who both have active arrest warrants in connection with the incident and are wanted by authorities. Police also say that charges are still pending against the promoter of the pool party.