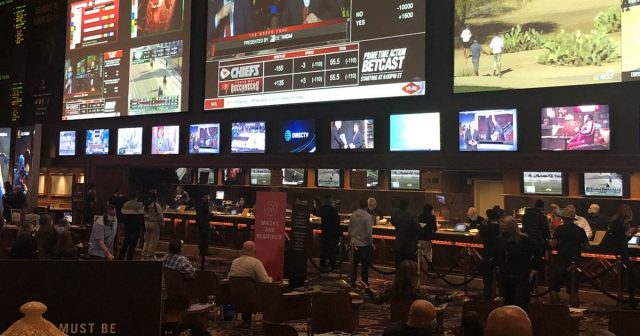 Las Vegas Metro Police have been called to a number of MGM properties throughout Las Vegas as angry customers claim MGM is refusing to payout winning bets after the companies APP went down in the middle of the Super Bowl.

A tweet just before 6 p.m. indicated the BetMGM app and MGM sports books were having major problems with people Super Bowl Bets.

We are now hearing that Las Vegas Metro has been dispatched to multiple MGM properties as angry bettors are claiming MGM is refusing to pay on winning bets.

People are reporting that MGM and Metro are threatening them with arrest and permanent ban form MGM properties, simply for trying to cash their winning tickets!

@BetMGM has all sports book sites closed with security personnel blocking entrances. But it’s okay that they took everyone’s money because they are offering you two drink tickets for the fraud

Threatening to throw people out in mgm grand for asking to get paid for 1st half. pic.twitter.com/4o1F7pCexP

MGM has blocked us after reporting the story, I guess they are not happy with our reporting on them, their ex-criminal CEO Jim Murren, and their involvement in helping the COVID task force destroy our city!

And you want people to come stay at your hotel and spend money there after you fuck us and now pay us. Fuck y’all motherfuckers

This comes after another weekend of violence at MGM and on the heels of finding out that former MGM CEO Jim Murren, MGM Resorts, and PLAYSTUDIOS’ Andrew Pascal have been using the COVID taskforce to shut down the state and profit from its destruction.