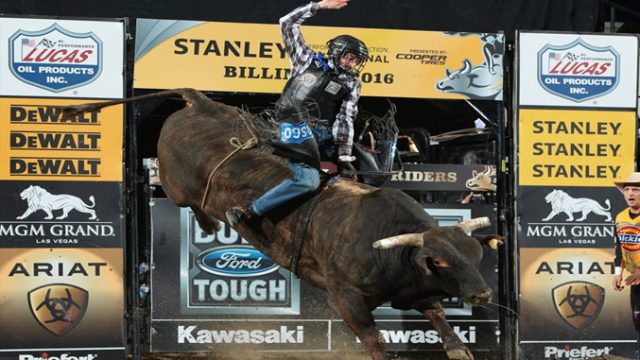 The PBR Rodeo World Finals is leaving Las Vegas for good and heading to Dallas after Governor Steve Sisolak made it his personal mission to destroy so-called conservative-friendly events in Las Vegas.

According to our sources at PBR, while there were huge doubts attendees would even show up in Las Vegas after Sisolak’s mask mandates and attempts to enact vaccine passports for large events and trade shows, Professional Bull Riders (PBR) CEO Sean Gleason did everything he could to try to keep the event in Las Vegas. But according to multiple sources at PBR and the Las Vegas Convention and Visitors Authority, Sisolak has made it his personal mission to do everything he can to push these events out of Vegas and make sure they don’t come back – high on the Sisolak hitlist were the NFR and PBR Rodeos, SEMA, and the SHOT Show.

We’ve been reporting that this was coming for months; PBR and several other freedom-friendly events have been trying to find a way to work with the Governor’s office, even submitting detailed COVID plans as per the governor’s mandates, but many have been blacklisted and their calls are not being returned.

In fact, last year Sean Gleason, Professional Bull Riders CEO said, “Well, to be perfectly candid we didn’t get calls back from the governor’s office so we worked through our friends at LVCVA MGM T Mobile, we’re the first out there with safe and responsible plans to conduct events, and, and we just couldn’t get the time of day couldn’t get a call and couldn’t even walk through our plan, I don’t know if our plan has been reviewed by anybody at the state level,” said Sean Gleason, Professional Bull Riders CEO.

According to the Las Vegas Convention and Visitors Authority, the PBR Rodeo brought an estimated 70,000 attendees and generated an estimated economic impact of $15 million a year in non-gaming revenue for the city. If we lose NFR, that will be another $200 million a year loss for Las Vegas!

The changes will go into effect immediately after the 2021 PBR World Finals which will conclude the current season in Las Vegas, Nevada, at T-Mobile Arena Nov. 3-7.

Unlike Sisolak, Texas Governor Greg Abbott fought to Bring PBR back to Texas

“We were excited to host the 2020 PBR World Finals in Texas, and we are proud to now welcome the most intense bull riding competition with the most engaged fans back to the Lone Star State in the 2022 season,” said Governor Greg Abbott. “Fort Worth is the Modern West, and there is no better place for the PBR World Finals to call their new long-term home. I congratulate the PBR, the City of Fort Worth, and Mayor Mattie Parker on this world champion partnership that will showcase Texas as the premier sports-entertainment destination, spur continuing tourism and travel, and bring new jobs to Fort Worth and beyond.”

“This has been an incredible team effort with PBR, Governor Abbott, our Fort Worth Sports Commission and so many others,” Mayor Mattie Parker said. “Fort Worth is the gold standard for public-private partnerships and we are marshaling all our resources to roll out the red carpet for the PBR World Finals.”

“This is a historic win for Fort Worth.  Powered by Dickies Arena and a community committed to hospitality, we are excited to announce this latest, significant sports event for our city. Welcoming the PBR World Finals beginning in 2022 shows how Fort Worth is attracting the most exciting and important events in professional sports,” said Jason Sands, director of the Fort Worth Sports Commission, a division of Visit Fort Worth.