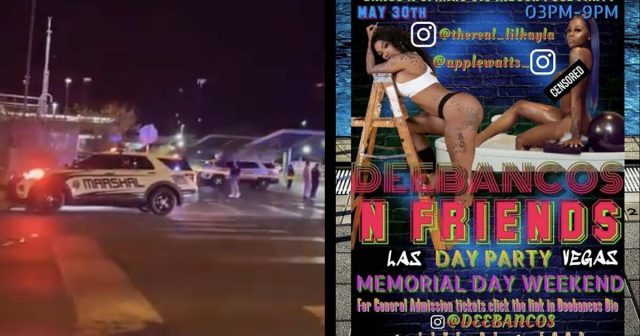 Over Memorial Day weekend, witnesses say at least 100 shots rang out at Pavilion Pool next to Palo Verde High School in Summerlin, after a bunch of gang members and hip-hop reality TV stars threw an illegal party and twerking contest at the city pool.

So far not a single arrest has been made, even though numerous videos exist online and Las Vegas Metro Police should know exactly who did this since the people are openly bragging about it online.

On Memorial Day we posted video of police on the scene:

So is the local media going to report on what Summerlin locals are saying was a gang-related, drive-by shooting last night at Pavilion Pool, Palo Verde High School or are they to busy eating hotdogs? pic.twitter.com/WynGsHjTGB

City staff told local news channel 8 that  “the pool was rented out for what was believed to be a family reunion. We found, however, that it was a party advertised with general admission.”

“We’ve got several investigative teams working this 24 hours a day to bring this to a resolution,” Metro Capt. Fred Haas, who heads the Summerlin Area Command told News 8. “We’re still trying to find victims and witnesses of this crime.”

“We have to make sure that these events are safe, not only for families that are having the events, but for the rest of the community, as well,” Haas said.

Councilwoman Victoria Seaman says the person who rented out the pool from the city did it under false pretenses.

“We take public safety very seriously, and we are going to get to the bottom of it,” she told the I-Team, “and we’re gonna find out what happened, so we can make sure it doesn’t happen again.” “These are not the type of events that we would rent out our spaces to,” Seaman affirmed. “These are for community, family events. Very disappointed.”

Our sources say employees quickly figured out what was going on, possibly days before the event, but feared charges of “racism” if they stopped the illegal event.

On Instagram and Eventbrite, a “Bancs and Spanks 3.0 Indoor Pool Bash” was advertised for Sunday, starting at 3 p.m. Numerous known gang members were promoting the event, including rappers, some degenerate named Lil Kayla (who sings about how her “pussy” doesn’t smell), some loser that calls himself “Obama’s Godchild”, and D-List Hip-Hop Reality TV trash like “Love & Hip hop Hollywood’s” Apple Watts.

These drug and alcohol fueled events are a weekly occurrence and are often illegally thrown throughout the city, many times on city property. Had it not been for the shooting, the public would have never even known it was happening, despite being openly promoted on sites like TikTok, Snapchat and Instagram.

Last September, another party thrown by degenerate rappers ended in a shooting at the Aria on the Las Vegas Strip. In the lead up to that event, a number of “rappers” even took to social media bragging that they were going to shoot up the event later in the night.

The fact that these thugs are so open about their crimes on social media, and are allowed to still roam the streets is beyond bullshit! They have literally zero fear of law enforcement!