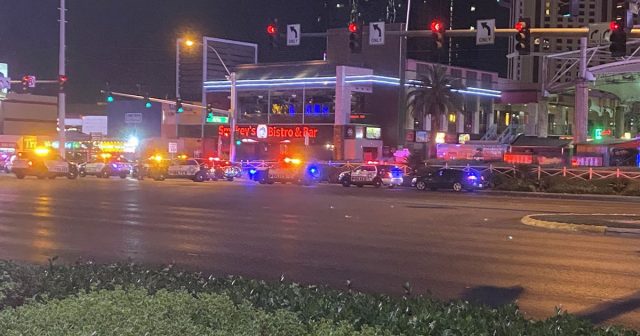 One person was killed, and another two were injured overnight in the latest Las Vegas Strip shooting.

Gunfire was reported around 3 AM Sunday morning at the Hawaiian Marketplace across from the Aria. Las Vegas Metropolitan Police Department Homicide Lt. Ray Spencer said one person has been taken into custody after yet another fight on the Las Vegas Strip turned deadly.

Police say a group got into a fight outside of the Hawaiian Marketplace on Las Vegas Boulevard, across from the Aria, when one man pulled a gun and started shooting. One of the people involved in the fight was hit, the shooter then fled the scene. According to the Las Vegas Metropolitan Police Department, two men then chased the suspected shooter, throwing rocks at his head.

The suspected shooter then turned and started shooting again, hitting one person in the leg. Another man was inured when a bullet ricocheted and hit him.

Homicide detectives arrested 25-year-old Malik Frost this morning for the shooting that left one person dead and another one injured. He faces charges for open murder and attempted murder.

The shooting comes just days after one person was shot early Thursday morning on Las Vegas Boulevard north of Flamingo Road, near the Flamingo Hotel & Casino and the Cromwell.

How many people need to be shot, stabbed or killed before Governor Sisolak says something about the violence?

For over a year now the Las Vegas Strip has seen unprecedented levels of violence. In fact, over the last two weeks, we have seen numerous unreported attacks by homeless drug addicts, a stabbing at the Cosmopolitan, the shooting at the Flamingo, criminal bike gangs attacking tourists and security guards, criminals trashing our infrastructure, BLM fighting with tourists, and a man being brutally beaten by a pack of thugs over a taco!

Just two hours before the shooting, another largescale fight broke out just down the street in front of Ballys.

On top of the deadly shooting last night, at least a half dozens fights happened on the Las Vegas Strip. Here is just one of them in front of Ballys pic.twitter.com/hepNr7H5fa

Video from the latest Las Vegas Strip shooting – 1 dead, 2 injured –
Second shooting this week on the strip, another major blow for tourism industry and not a peep from our governor! https://t.co/xxjFbMZSg0 pic.twitter.com/wGVbJZjW3B