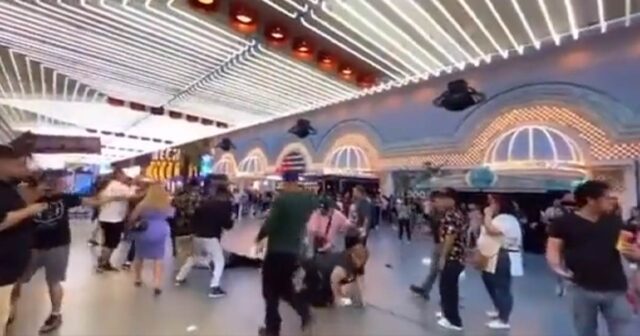 In what is becoming an almost nightly occurrence on the streets of Las Vegas, one man is dead, and another is wounded after a fight in a Binion’s Hotel Casino spilled out onto Fremont Street, and people started shooting.

Lt. Jason Johansson of the Las Vegas Metropolitan Police homicide unit said one person was fatally shot and an innocent bystander was wounded at about 2:12 a.m.

As can be seen in the video below, a gang of men who had been fighting inside the casino came running out onto Fremont street and continued fighting. Moments later, a person pulled out a gun and shot and killed someone.

When @GovSisolak brags about these new visitors he’s bringing to Las Vegas, to fix the economy he broke, this is who he’s talking about….

Both gunfire victims were rushed to UMC, with the person involved in the fight pronounced dead and the bystander recovering in the hospital with non-life threatening wounds.

The shooting is just the latest in what is becoming a nightly occurrence in Las Vegas. While our do-nothing governor brags on Twitter about how he is fixing the economy — the economy he broke — and helping to bring new visitors to Las Vegas, what he isn’t telling you is those new visitors are drug dealers, addicts, and criminal street gangs from California.

Last Tuesday, a black female shot a security guard in a shooting on the Las Vegas Strip outside the Bonanza Gift Shop on the corner of Las Vegas Boulevard and Sahara Avenue.

While the local media is refusing to talk about what’s really happening, refusing to acknowledge that Fremont Street and the Strip have been taken over by street gangs and thugs, the fact is people are being assaulted, robbed and even killed on the Las Vegas Strip and Fremont Street almost nightly.

Back in April, things started getting so bad on Fremont Street that we even had a drive by shooting near the El Cortez. Late last year we warned our readers that it was no longer safe to frequent Fremont Street, and warned that the City of Las Vegas and Nevada Democrats were purposely setting up deadly situations and allowing child exploitation on Fremont Street.

This is what Fremont Street Looks like almost every night!