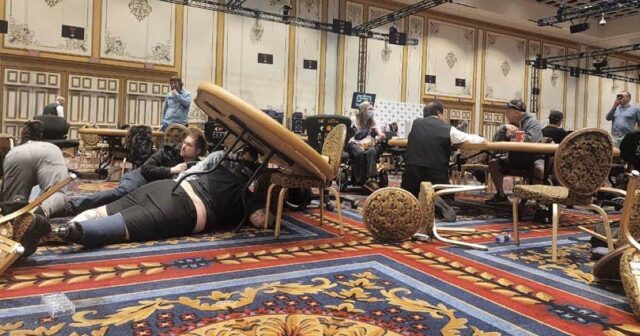 How exactly does a rock being thrown at a window at the MGM Grand cause reports of shootings and tens of thousands of people stampeding and taking cover at seven different casinos, some over a mile away? Well, if you believe our local media hacks and local paid-off dipshit bloggers like Vital Vegas and Vegas Locally, that’s what the official story is! It was all because of a rock!

Last night around 10 PM, tens of thousands of people in at least seven separate casinos went running, some stampeding each other and throwing people to the ground as witnesses say they heard gunshots ringing out inside the casino. From MGM all the way down to Caesars Palace, people went running, Casinos shut down slots, and security rushed people out backdoors.

7 separate Las Vegas strip casinos reported stampedes and reports of shootings… but nothing happened according to authorities!!!

Here is What happened at Aria. pic.twitter.com/OlglX2p4AB

We were at Caesars hotel saw a block out on the slot machines. About two minutes later heard multiple gunshots and everyone started running out of the casino. pic.twitter.com/Dj8xQMGax8

At the Paris, the World Series of Poker went into full lockdown mode and players took cover under tables after reports of shootings inside that casino went wild.

Don’t worry, our media says it was “FALSE RUMORS”! Metro says it was just a loud noise at MGM

Reports of a shooting near the MGM tonight are unfounded. Initial reports are a glass door shattered causing a loud noise which startled people in the valet area.

Yep, the official story from the Las Vegas Police Department is a loud noise startled people in the valet area at MGM. Funny how there is no mention of the stampedes and reports of shooting sounds at seven casinos a mile away!

As soon as the chaos started, local bloggers did exactly what they get paid to do — cover for the city! Local drunk and so-called blogger Vital Vegas took to Twitter to make fun of people who still swear they were shot at. While there is no doubt someone threw rocks at glass doors at the MGM Grand, witnesses claimed something that sounded like gunfire rang out at multiple other casinos around the same time.

While we have no idea if this was an actual shooting, and because this is Las Vegas the true story will probably never come out, our sources tell us this was much more than a rock being thrown at a glass door at the MGM Grand. After all, there are stabbings, fights, and chaos on the strip every night — it never causes people to panic at multiple casinos at the same time. Hell, every couple of weeks we have a shooting down there, you don’t get this kind of response from even real gunshots!

Our law enforcement sources are telling us that they think it was some sort of coordinated attack or possibly “premediated prank” to cause mass panic across the Las Vegas Strip. According to our sources, they believe that the gunshots people heard may have been fireworks being let off at several different casinos to simulate gunfire and cause panic.

As we reported last year, gangs from California have been coming to Las Vegas specifically to cause this type of chaos. In fact, there were a number of cases where these sick bastards were rigging their vehicle exhaust to simulate gunfire and trying to make visitors think there was an active shooter on the strip. Here is one of those incidents from last March.

These morons were driving up and down the strip filming each other doing donuts… they hooked up an exhaust that simulated gunfire then drove around the strip trying to pretend they were shooting people… pic.twitter.com/vn0C5kg3cB

We also believe that so-called influencers and internet streamers may have helped push the panic for views on their live streams.

We believe this is same "influencer" that got himself stabbed doing this last year. There are dozens of these streamers who come down looking to start trouble so they can stream it.

Wouldn't doubt they helped cause the panic last night!https://t.co/K8qVOslAqU