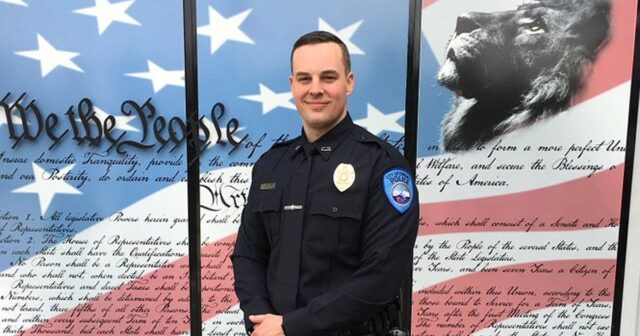 In a follow up to our story yesterday on the latest stabbing/murder on the Las Vegas Strip, we have learned that the victim who was stabbed and killed right outside MGM Grand was an off-duty police officer that was on vacation in Las Vegas.

The City of Edmonds released the following statement on the fallen officer:

With deep sadness, the Edmonds Police Department announces the loss of Officer Tyler Steffins on Saturday, March 26th. Officer Steffins was off-duty in Las Vegas, NV when he was attacked by a person unknown to him who was armed with a knife. Officer Steffins was transported to an area hospital but did not survive his injuries. A suspect was taken into custody, and the Las Vegas Metro Police Department has launched a homicide investigation.

Officer Steffins started with the Edmonds Police in August of 2018. He was a veteran of the United States Marine Corps (Corporal, 2007 2011) with recognition for his service during Operation Enduring Freedom. Officer Steffins graduated from the police academy in March of 2019 and was #1 overall in his class. Upon completion of field training, Officer Steffins has served the community as a patrol officer for both day and night shifts.

Tyler is survived by his wife, mother, father, brothers, sister, two young children, friends, and loved ones. Edmonds PD will work closely with the family to provide assistance and support during this difficult time. “This is a tragic loss for our agency when our staff and the entire region is already in a state of mourning for other fallen officers. While we grieve with heavy hearts, our peer support program members are actively engaging with our staff. Tyler was a valued member of our police family whose infectious smile and contagious laugh endeared him to his peers. We will miss him terribly but cherish the times we had with him. We remain committed to providing quality service to our community even during the most trying of times.” Chief Michelle Bennett

Steffins joined the Edmonds Police Department in August 2018. He was a corporal in the U.S. Marine Corps from 2007 to 2011, with recognition for his service during Operation Enduring Freedom.

The suspect, now identified as 58-year old homeless drug addict Freddy Allen, has been arrested and charged with murder with a deadly weapon. Our sources tell us he was been arrested multiple times on knife-related charges on the Las Vegas Strip, but allowed back on the streets because our democrat DA and local politicians are a bunch of wimps who cater to criminals instead of cleaning up our streets.

According to our sources, Freddy Allen threatened a security guard at Fashion Show mall last year with a knife, and had previously stabbed another man outside of Harrah’s — an area where nightly attacks on tourists happen. Sadly this seems to be a pattern; earlier in the month we learned that the mass shooter who shot up a black-only nightclub had 82+ Arrests 9 Felonies, but was still allowed out in the streets in Las Vegas.

UPDATE: Stabbing at New York-New York Casino was by another homeless addict that Las Vegas Metro & @JoeLombardoNV failed to remove from the strip!!!

Another person dead because mentally ill “homeless” drug addicts have been allowed to takeover the strip!https://t.co/JwVB0xFItd pic.twitter.com/MGFpgpQt6q

For over two years now we have reported on the out-of-control gang violence and attacks on tourists at the hands of the homeless drug addicts that have taken over the Las Vegas Strip – the local media, Metro, Casino Security, and Casino Executives have all ignored the problem.

Second officer killed by Homeless Addict in Las Vegas in the last year!

Officer Tyler Steffins is now the second officer to be killed by a homeless drug addict on the Las Vegas Strip. Last March, a homeless addict assaulted and killed a retired Connecticut State Trooper Thomas Driscoll. According to our sources, both of these addicts were well-known troublemakers on the Strip, but little was done to try to remove them from harming tourists.