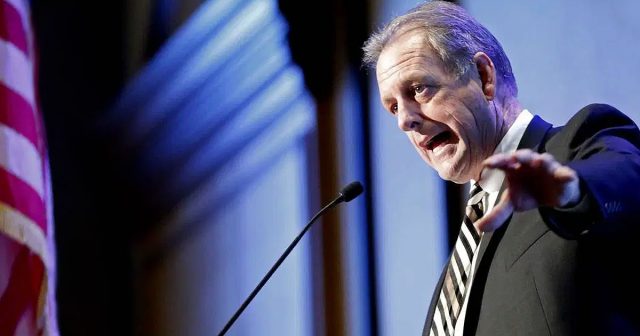 North Las Vegas Mayor John Lee, who recently switched from the Democratic Party to the Republican Party in what looks like a bid to run for governor in 2022, is coming out swinging on vaccine passports and government overreach.

“I strongly oppose any vaccine passport requirement. Forcing Americans to carry a ‘vaccine passport’ is completely unacceptable and pure government overreach. It is not the government’s place to require any Nevadan to show proof of vaccination,” Lee said.

“Thanks to many hard-working medical experts, and President Trump’s Operation Warp Speed, our state and nation is well on its way to defeating the COVID19 virus. But requiring all citizens to share their private health records is something you’d see in a communist country, not in the United States of America.”

“The Biden Administration is actively and wrongly encouraging groups to create vaccine passport systems showing proof of vaccination, and they must be stopped. This is yet another example of the Democratic party moving further and further to the left and embracing a radical, liberal agenda that abandons so many.”

As we’ve been reporting for over six months, Governor Steve Sisolak and Jim Murren have been using their influence over the Gaming Control Board to push mandatory vaccinations and vaccine passports on hospitality workers and the convention industry. Earlier this month, Wynn Resorts CEO Matt Maddox announced policies that will force Wynn employees to either receive a COVID-19 vaccination or submit to weekly COVID testing in order to keep their jobs.

The announcement came as the Nevada Gaming Control Board started blackmailing smaller casinos into forcing their employees to take the shot or risk keeping business-killing capacity limits in place indefinitely or even losing their gaming licenses. The Gaming Control Board also started threatening small bar owners to force their employees to become vaccinated or lose their ability to do business in Nevada.

While we hope Lee is against the vaccine passports, sadly it may just be another politician trying to get elected.

Earlier in the month, Lee fueled speculation that he was running for governor when he switched parties from the Democratic Party to the Republican Party

“Though I’ve been a registered Democrat on paper my entire life, I made the switch in my heart a long time ago, because on some things, there’s simply no compromise,” he said in a statement. “That’s why I voted for President Trump twice. That’s why I had an A+ rating from the NRA and their endorsement in my time in the state senate. I refuse to compromise my pro-life, pro-2nd Amendment values. I know there are countless others who want to make the switch, because it means the difference between hope and despair for their children and grandchildren. I hope they join me.”

Here is the official letter he released when switching parties:

While we welcome allies in the fight against tyranny and government overreach, I’m always skeptical of these asshats who constantly switch parties, put on phony accents, or change their political affiliations and beliefs the moment they think it can help them get elected.

I mean it reminds me of the dipshit “Big Dan Rodimer” who launched a failed attempt to run for congress here in Las Vegas, and then the moment he lost immediately moved to Texas, put on a cowboy hat, gave himself a fake southern accent and started a new campaign in a new town — fresh with new persona.

Is this really the best we can do? When are we going to stop voting for phony bastards who have zero interest in fighting for the average hard-working American?