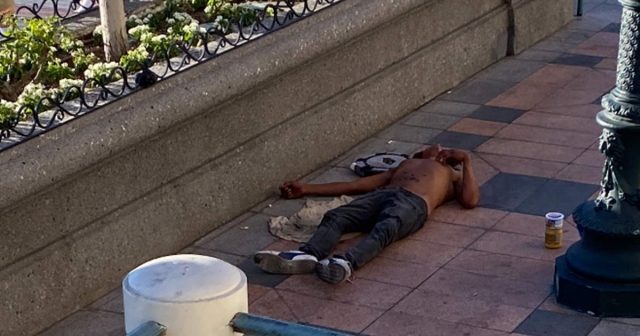 Entire sections of the Las Vegas Strip are being claimed by street gangs, drug pushers, and homeless addicts as our city, county, and state leaders have left tourists vulnerable to attacks, robberies, and assaults.

For the last 15- 16 months we have been reporting on the complete breakdown of social norms and society throughout Las Vegas, sadly, while the media and local bloggers pretend “Vegas is Back” — most being paid with our tax-dollars to repeat the mantra — the truth is our authorities have lost complete control. While we applaud the efforts made by many dedicated Las Vegas Metro officers, their leader Sherriff Joe Lombardo seems more interested in running for governor than keeping the public safe.

Entire sections of the Las Vegas Strip have now become what we would call NO-GO Zones — and on weekdays, the police are almost nowhere to be found. From the addicts and criminal street gangs that stalk, rob and beat tourists outside Planet Hollywood to Casino properties like Casino Royale, Harrah’s, and the LINQ which now allow homeless drug addicts to openly stalk their victims inside of billion-dollar resorts, it’s beyond sad what has happened to our once great city.

Last night, we had to completely avoid the area around Casino Royale and Harrah’s as we witnessed a gang of at least 9 homeless drug addicts take over the inside of Casino Royale, screaming at and physically assaulting tourists who made the mistake of passing through the casino – assuming it was safer than the street outside where they had to step over homeless addicts to pass from Casino to Casino.

Even we had to avoid the area!

Normally, unlike the jackoffs in our local media, we get right in there and try to capture what’s really going on – last night even we had to step back and avoid the chaos out of real fear of being hurt trying to cover what was happening. I apologize for the shitty picture here, but it’s all we could get without putting ourselves in real danger.

The entire entrance to Casino Royale was taken over by at least 9 criminal addicts who were perched at various machines jumping out to assault people as they walked through. One of them would kick a soccer ball, if a tourist was dumb enough to kick it back thinking it was part of the Vegas experience, the nut jobs began to pounce on them – screaming, yelling, grabbing at the tourists and then whipping the ball at their backs as they tried to pass through the gauntlet of addicts – it was really quite bizarre – and again, no metro or security in sight!

We’ve covered this area as a hotspot for trouble in the past, you can read our article here, here and here or check out the videos below:

Unfortunately, the chaos is everywhere. Local YouTube Streamer Cyrus Hojjaty managed to catch 2 separate fights in under an hour over the weekend, while the media insists “VEGAS IS BACK”. In reality, this is what tourists who will likely never come back actually see when they arrive…

The city, and many of the Casinos are actually catering to crowds that they know are coming here to fight and cause trouble! Back in May, the Rio hosted an event with the same groups that have been terrorizing our city with their sideshow events… They have replaced business tradeshows with this trash!

And by catering to these people, this is what Vegas looks like and our local workers have to deal with on a nightly basis… (this was a restaurant on Fremont street a couple weeks back)

Even the mega-resorts are at risk of falling!

Even the opening of a brand new 4.3 billion dollar casino wasn’t spared from the chaos, as local authorities could do nothing to stop near-riots out front of the opening and open assaults and violence inside the newest mega-report. Local Photographer, Bror Fredrik captured some of the chaos out front.

And once inside, as we reported earlier in the week, tourists got to experience the violence from our “New, Sisolak-Approved, Protected-Class Visitors” first hand!