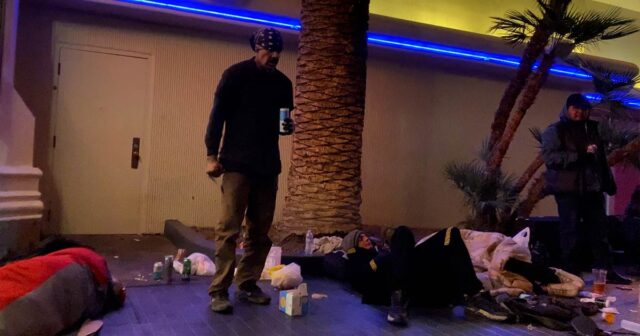 The National Finals Rodeo, one of this town’s biggest money makers, has returned to Las Vegas for ten days of Rodeo events, western gift shows, and country concerts. But, unfortunately, it’s hard to see how they stay in Las Vegas when their contract expires with what Rodeo fans are now experiencing on the Las Vegas strip.

NFR is back… once again Sherriff Joe Lombardo, Las Vegas Metro Police and @ClarkCountyNV have done nothing to ensure the safety of visitors!

Between last year’s mask harassment and Sheriff Joe Lombardo’s targeted persecution of cowboys on the Las Vegas Strip to this year’s homeless camps and complete abandonment of safety patrols by Las Vegas Metropolitan police under the final days of Sheriff Joe Lombardo, it’s very unlikely rodeo folk – or any other convention for that matter – will return to Las Vegas once their contracts are up and they can move to a new city.

But hey, keep voting these losers in and keep ensuring the destruction of our once-great city!

Keep in mind, our government officials and casino CEOs continue to do nothing, despite multiple murders now on the Las Vegas strip at the hands of these homeless addicts. In October, eight people were stabbed and two died outside of the Wynn, after a homeless illegal alien went on a stabbing spree on the Las Vegas Strip. That same month a homeless drug addict beat a man to death with a cinder block outside of Mandalay Bay. But not even that was enough to push our officials to act.

How many more people have to die at the hands of homeless addicts on the strip?

Las Vegas has turned into an absolute warzone with nightly attacks on tourists and violence now even spreading into residential neighborhoods throughout the valley. In fact, it seems our local police forces have lost all control and have turned into a complete clown show. On Wednesday, an illegal aliens gang member managed to repeatedly evade Las Vegas police as he drove around the strip terrorizing tourists. The man was able to flee from officers at least 4 times as he drove over sidewalks and almost hit multiple toursits near the strip.